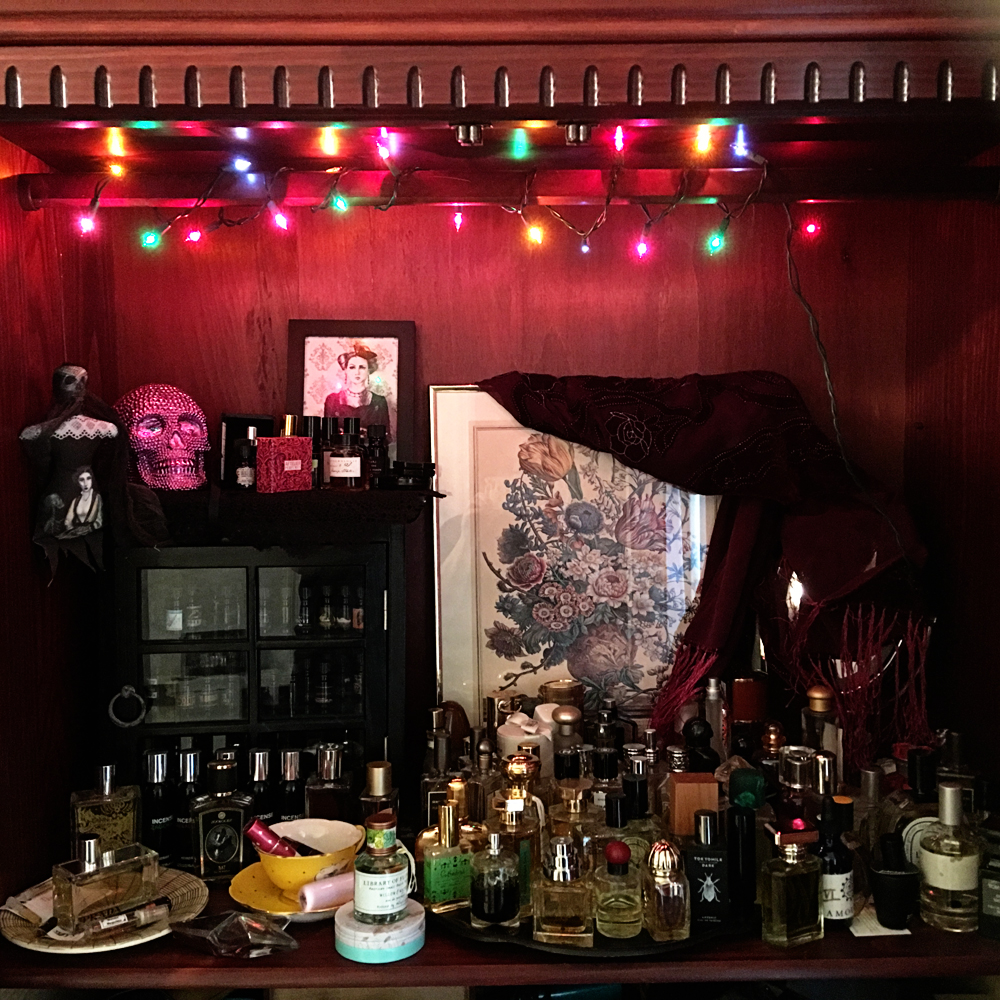 A friend assured me recently that the chaos in my perfume cabinet was not, in fact, a hot mess and a poor reflection of my character–but instead that it was pretty cool and it reminded her of a witch’s workbench.  Actually… she only voiced the latter half of that thought, and so I’m choosing to extrapolate the rest of the sentiment because she’s a thoughtful person and that’s probably what she meant.

A witch’s workbench! I loved that. And I love thinking of perfume in that context–after all, the transformative powers of fragrance are myriad and a sort of magic of their own. Fragrance has the ability to transport us to another place or time, be it a memory, a wish for the future, or even a dream. It conjures phantom loves and losses, those whom we adored and those we mourn. It intoxicates, bewitches and holds our admirers rapt, enthralled. It allows us to slip into the skin of that which we would wish to be–the femme fatale, the ingénue, (or, if you’re weirdly specific like me, “Morticia Addams tending a poison garden at midnight in late summer, moments before fearsome thunderstorm”).

Some perfumes though, as least as far as I can tell, just feel like magic. Perhaps they don’t exactly remind you of anything from your past and maybe they don’t make you feel like Audrey Hepburn or Seven of Nine or Siouxsie Sioux or whoever it is that you channel to feel special or beautiful. Perhaps their mere presence on your shelf causes a shimmer in the corner of your vision; a certain slant of light at the right time of day cascades through the faceted glass bottle and creates a kaleidoscopic prism against the wall. Maybe the cool heft of a particular flacon cradled against the warmth of your palm feels grounding and reassuring. Perhaps to simply gaze upon your collection and deeply inhale the exotic aroma of all the fragrances combined is a small ritual on its own. 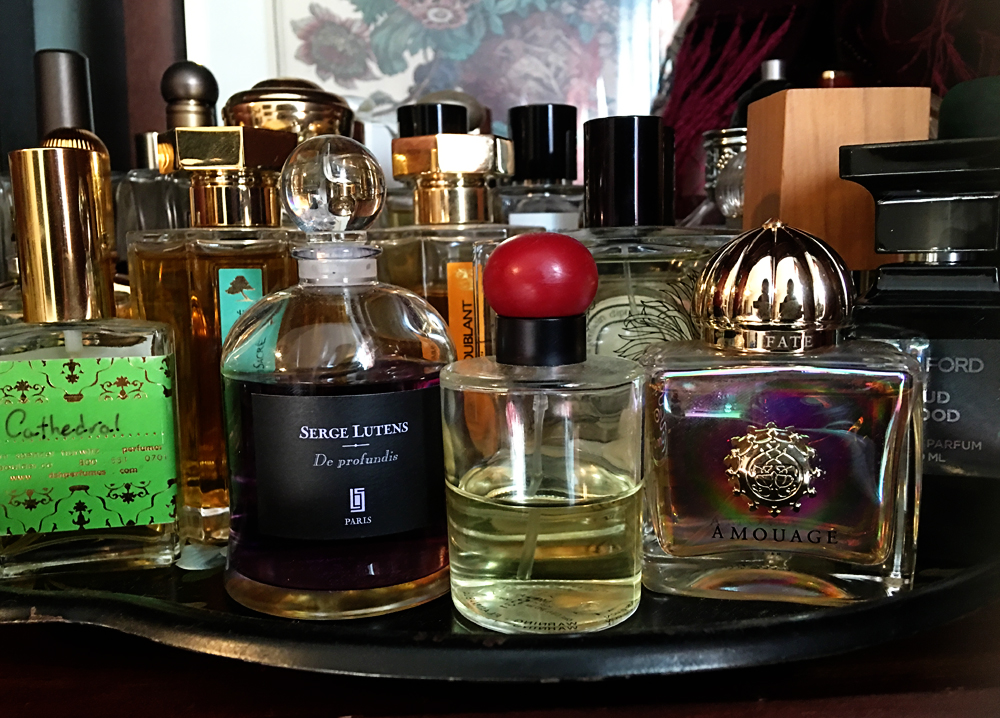 I have a few scents in this vein that hold their own magic; they smell as though they may induce a trance, or open a portal. Some demand a sacrifice of the wearer, and some bear unexpected gifts. Some smell of soothsaying and powerful prophecy, whereas others might sit quietly on the skin, unnoticed, a charm against unkindness or ill-will. I own all of these and they speak to me in a secret language of their own, a scented murmuration that no doubt only I understand…though I am very happy to share with you a handful of my loves. Make of their mysteries what you will!

Mississippi Medicine from DS & Durga opens with an astringent, peppery cypress, and gives way to a pine-crackling, smoky fire, sweet birch, muddy grass and scorched leaves and dries down to a sweetly herbaceous, woody, resinous scent. This tells the story of waking with strange incense in your hair and the vague dream of descending into the dark, dancing and divining with ancestors, and having been part of rituals older than you can imagine. A scent of potent magics, both sacrificial and healing.

Norne from Slumberhouse smells of black night forests frozen in time; tarry, resinous pines and greenest firs and crisp midnight air, tiniest pinpoints of starlight. Woodsmoke and loam, lichen and fern, and musty mosses creeping, creeping over fallen logs and worn stone paths. Spiders webs tangling high in the branches, dust settling on the strands. Time has slowed and finally stood still in this forest while the world outside advances and evolves and moves along as is the world’s habit whether one interferes or not. This is a still, solemn, forgotten wood, without any birth or growth, and yet undying.

10 Corso Como is all dry, lofty sandalwood, smoky desert resins, and earthy, weirdly off-kilter – almost alien or at least otherworldy- florals. It calls to mind a mysterious, aromatic wooden chest, unearthed by a strange sandstorm. At once both sensual and spiritual, and without a doubt a very, very handsome scent, I find myself frequently craving it and nothing else will do.

Heely’s Sel Marin conjures a dim lit sea save, illuminated by phosphorescent crystals clinging to salt crusted walls. Mossy rocks, worn smooth by time and tides and the wind, which echoes eerily through the subterranean stone chambers. Bits of driftwood and seaweed and perhaps small animal bones littering the damp chamber floor. A sea priestess lain dormant, waiting for a dark ritual to conjure forth from slumber. This is a Dion Fortune novel in a bottle.

Amir from Laura Tonnato is a deeply hypnogogic scent, all dark, narcotic myrrh and nocturnal resins. A midnight philtre, thickened with age and swimming murkily at the bottom of an ancient crystal flacon, tucked away in some moth-eaten velvet robes. This is the scent I imagine one of the visitors wearing during that infamous summer in 1816 at the Villa Diodati with Byron and Polidori.

Serge Lutens’ De Profundis opens with the scent of big, lively chrysanthemums, in the fall -brisk, slightly spicy and musty. Delicate, dewy violets and damp loamy earth follow shortly thereafter, along with a cool metallic chill that calls to mind a brief wind, rising from nowhere, a shadow that suddenly falls across your path. This is the scent of a pensive cemetery stroll in late autumn, crushed funeral wreaths beneath your feet, the veil of the sun struggling through the clouds, the lingering wisps of incense from morning mass.

2 Comments on A Year in Fragrance: Witch’s Workbench