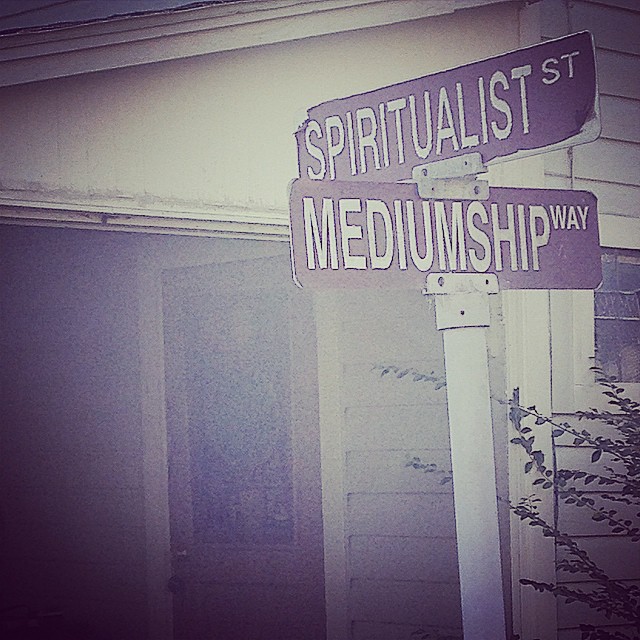 Not long after my mother was diagnosed with stage 4 cancer in December of 2012, she converted to Catholicism.  I can’t speak to how devout she was and it doesn’t matter to me – I believe the idea of faith and the trappings of belief and ritual gave her great comfort during her last year – so who cares if she never made it to church or attended a single mass.

And so what if she collected blingy rosaries alongside gorgeously rendered gilt-edged tarot decks in her final days- can’t a soul have room for more than one set of beliefs, more than one way for communicating with the divine? Or maybe she was hedging her bets, who knows.  Her relationship with her creator and her spirituality were no business of mine.

For as long as I can remember my mother cultivated a strange system of beliefs.  I recall, at the age of six or seven, sitting silently in a kitchen chair across a ouija board from my mother, my small hands on one edge of the planchette, her slim fingers on the other, and a phone cradled between her ear and shoulder as she chatted with a friend at the same time we were attempting to make contact with spirits.  At a very tender age I learned that my mother just didn’t do things the way other people did, I guess.  I imagine I grew up thinking if you weren’t carrying on conversations with both the dead and the living at the same time, you were probably doing it wrong.

Books on astrology and mediumship were always stacked precariously on our kitchen table; I can picture my mother’s face through a haze of smoke over breakfast as I picked at my Wheat Chex, while she thoughtfully read the paper and drank her coffee, a dangerously long ash from her cigarette dangling over the cover of a Linda Goodman title on Love Signs or perhaps something by Louise Huebner.

I grew up thinking that in every house there were hidden chest of tarot cards, that every stray slip of paper was a piece of an astrological chart, that candles and incense and yoga circles were every family’s Wednesday night. This was a huge part of the curiously fascinating, terrifyingly intense woman that my mother was in life, this yearning for hidden knowledge and a connection to a plane beyond our own.  So it only made sense to my sisters and I to honor that facet of her personality in death: with a visit to a medium, almost a year after her passing.

Despite the fact we had been bandying the idea back and forth for almost a year now, we were ill-prepared for this.  We realized we didn’t even have a code word.  As in, I suppose, some absurd word or phrase or inside joke that only we would understand, and we  would recognize immediately if the medium in question was the real deal if he or she were to utter it.  (Since then we have all come up with individual code words and phrases. If you intend to communicate with your loved ones from beyond the veil, I suggest that you take a moment or two to mull it over and do the same!)

Furthermore, we really didn’t even know how to go about finding a recommended spiritualist. We were terrified we were going to get a dud.  You know the kind: “I see a color…a number…a man! …or maybe a woman!” OKAY THAT’S $250 NOW SCRAM”.

Fortunately for us on the day of our intended sojourn, one of my sisters recalled a medium she visited a few years ago in Cassadaga.  “She wasn’t …too bad…?”, she offered doubtfully. And with that, we decided that not too bad was just good enough for us, and proceeded to make an appointment for later that afternoon.

I am really not sure how to talk about the afternoon that followed.  Much of it – two thirds of it, really – is not my story to tell, and that ventures into sharing -details-that-are-none-of-my-business-to-share territory. I can, however share some of my impressions of the reading.

Our medium/psychic, Birdie, lived in a small, unassuming house at the edge of the spiritualist camp -you’ll recognize it by the “Spiritual Garden” sign outside, beside the small dirt driveway which guests can park in.  The rickety screen door, wood-paneled walls and crocheted throws seemed to belong to any other older Florida home, and as we took our seats around a small desk at the rear of the house, I could hear Birdies’ husband mowing the lawn or doing related noisy things in the backyard. It was perfectly ordinary and absolutely surreal all at once.  As if on cue, the three of us giggled nervously.

Birdie seated herself, turned to us, and without missing a beat, asked “why do I see bananas?” This threw us for a bit of a loop.  Why WOULD she see bananas? It then dawned on me that my mother despised bananas (as do I! wretched fruits.) and I offered that piece of information.  Birdie seemed to take this as a sign that we were indeed talking with our mother.  I wish I had thought to ask how this all works.  I mean, was our mother’s spirit there, like an ectoplasmic parrot on Birdie’s shoulder, whispering things in her ear?  Or was it more like a crackly, static-y connection to the next world and maybe our mother made some sort of collect call? Even if I had the wherewithal to ask…how do you even ask that?  Is that too personal, or some sort of spiritualist faux-pas?  I am still pondering this.  Feel free to weigh in.

I am not too certain that I should have been concerned about any hurt feelings though, as Birdie herself was not terribly diplomatic with the messages she delivered.  Maybe it’s a “don’t shoot the messenger sort of thing”, or how you can’t be terribly upset with a translator for passing on the unintentionally rude mumblings of diplomats.  An example of this: at some point during the reading she looked at my two sisters, and then me. “You”, she said, pointing at me “you don’t seem to think as much as these other two girls do”. Well!
But the funny thing is…she isn’t wrong.

But I am jumping ahead. One of the next things that happened is that she glanced at my youngest sister, who was wearing a tee shirt that said something about Indiana and asked “why do I look at you and see California? Does that make sense?”  I don’t mean to be stereotypical, but I don’t think anyone could really look at my sister and see California; she is pale and small with shocking red hair and a penchant for historical fiction and a love for rainy afternoons. However, she has lived out in the deserts of California for the past 7 years, working as a librarian.  Birdie was spot-on. How did she know? Weird.  We had not told her anything about ourselves ahead of time, and other than showing her a picture of our mother (it was actually a 50+ year old photo of a graduation), she had nothing at all to go on.

The next 45 minutes was peppered with those sorts of instances. Birdie asked if we knew a “Sandy or a Sandra”.  Our mother, she said, was apparently spending a lot of time visiting this person. Sandy was my mother’s best friend, and they’d had a bit of a falling out in the months before she passed. Aha!  Another question: “does the name Rose or Rosemary make any sense to you?  She’s with your mother right now.”  A chill ran down my spine when I heard this, for Rosemary Denise Kelly (or Kelly Denise, I can never remember which) was my mother’s much beloved, very pampered cat, who died many years ago. It sounds silly, but whatever other nonsense or baloney we heard during the session (and there was a fair amount of it), *this* was the small thing I had been waiting to hear.  Picturing my mother with that dumb fluffy cat in the afterlife was more comforting than I could possible explain.

Another thing that she said, that gave us all a laugh, and a profound sense of relief I imagine, was when Birdie asked “did your mother ….curse a lot? I get the feeling she swore like a sailor ”  Ha! Did she ever! That was such a huge part of who she was, and if Birdie hadn’t picked up on that, I think we would have been concerned.

Our time was up before long and we silently shuffled out and drove up the road for lunch.
Over a bottle of wine at the Cassadaga hotel we discussed our thoughts.  It was nothing like any of us had expected and yet I think, each in different ways, we found a bit of peace from something we had heard. 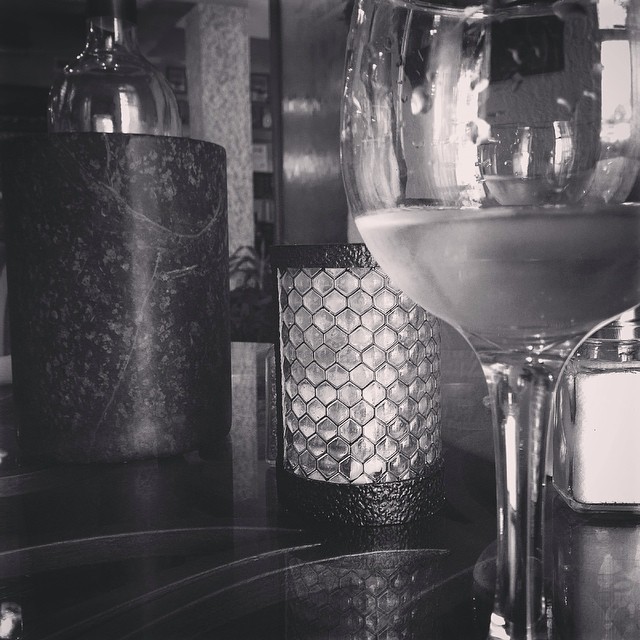 I suspect that we were all hoping for an experience that was maybe a little more…atmospheric?  Swaying curtains and lit candles and maybe a cold spot or two, knocks on the walls, something to indicate the…presence of…something?  We’ve probably seen too many movies. I know I’ve for certain read Richard Peck’s Ghosts I Have Been too often; I was really hoping for a crazy Blossom Culp-like encounter.

Although not much changes from year to year – and I do visit Cassadaga once a year now, usually every October – we did take some time to walk around the town, to sort of decompress (it was rather nerve-wracking, at least for me) and to absorb everything we had been told and our thoughts on it. This was our first time visiting the town, all three of us together, and so we bought some tee shirts to commemorate the occasion, and I picked up a pendant that sort of looked like a cross between some far-off nebula and a really girly eye of Sauron.

Though I don’t know for certain how our mother might have felt in her final days about us consulting a medium, and if she would be able to reconcile that with her newfound love of The Lord, I do know beyond the shadow of a doubt that as a lifelong shopping addict, she would have approved of a few purchases and shiny baubles to end the day with.