I sincerely thought that I had prepared myself for the loss of my maternal grandmother; that I had steeled myself for the absence of her weird light, that I was ready to brave a world in which the wisest, kindest, most influential woman in my life no longer existed. The passage of recent years saw the loss of all of her children, including my mother, and then a year and a half ago, the death of her husband of 72 years, our beloved grandfather. My grandma had lost so much, and had been unwell for so long; she was ready to let go…the only problem was that, her body, though it was slowly shutting down, was certainly taking its time and wasn’t ready to let her pass to the next big thing just yet.

My sisters and I used to whisper that perhaps our grandmother was a witch, or a vampire, or maybe even a Highlander. A creature who had bargained for immortality, or perhaps she had it unwittingly bestowed upon her– but regardless, she would end up outliving us all. I think we truly believed this supernatural theory regarding her longevity after watching several years of this ninety-something-year-old woman bouncing back from various maladies and afflictions and health-related dramas–a little worse for wear each time, but she would never lose that mysterious, mischievous twinkle in her eye. “Ha!” it seemed to glint and tease, “…think again! You’re not getting rid of me that easily!”

But regardless of whether it was some vital bit of sorcery on the part of her own body or the spell cast by the fierce love of her granddaughters, death came for her in the end after all, and I suppose there is no magic that I know of, which can–or should–defy that call.

My grandmother’s death marks the passing of the last adult figure in my life, which is a pretty strange feeling, I can tell you that. Or at least, I know that to be true on an intellectual level, but to be honest, I’ve been feeling her absence long before her passing. For so long she was lucid and “with it” and even if she’d only met you once in her life and even if it was 50 years ago, she would always remember you. But on New Year’s Day in 2017, two months after she turned 95, a cerebral episode left her increasingly confused and disoriented, and this rapidly developed to a point where she didn’t know where she was, or who we were anymore. We had worked so hard to keep her at home, and she didn’t believe it was her home anymore. It was a heartbreaking decline. 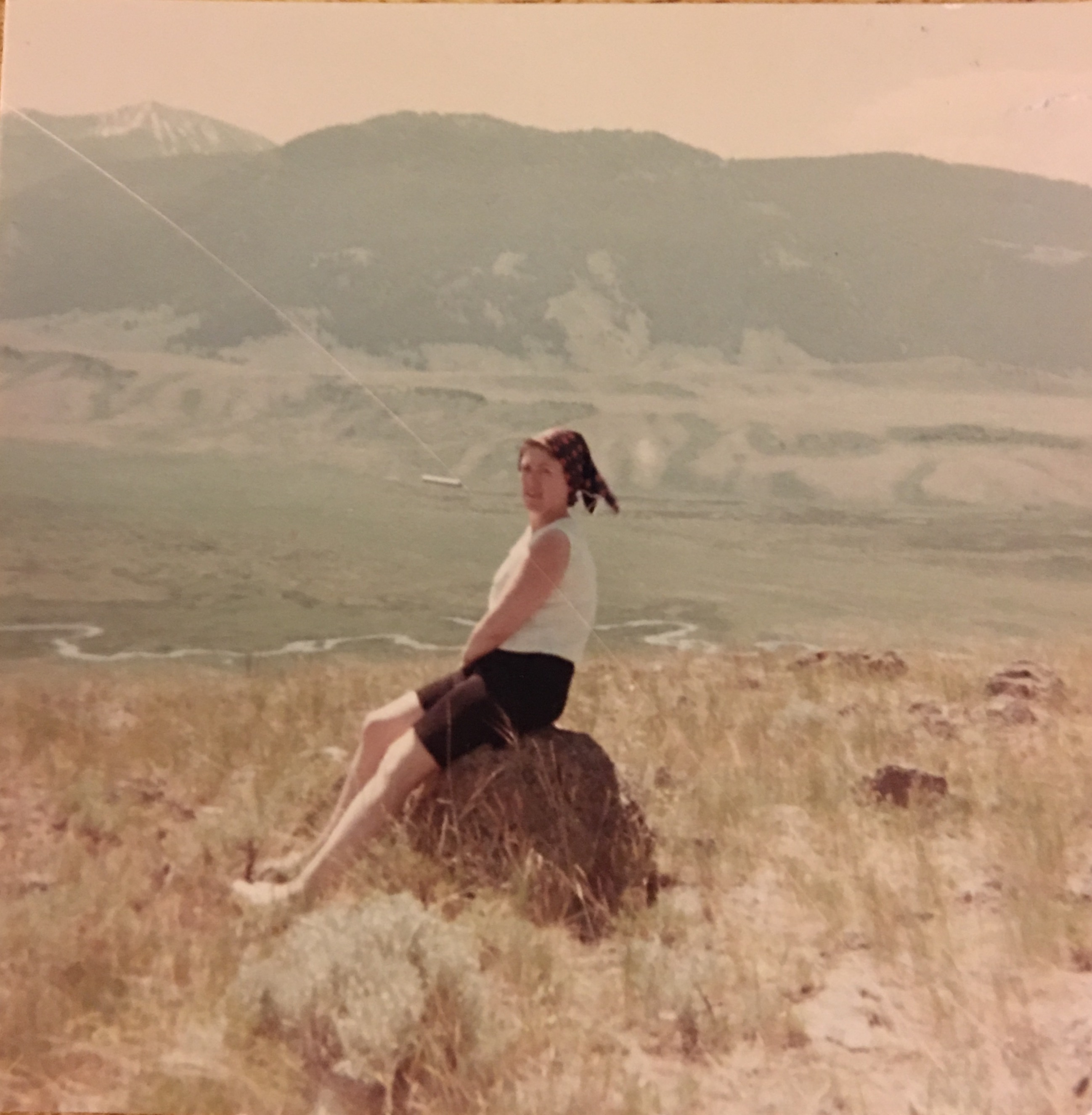 I love this hazy, old photo of her. It is strange to admit, but I never actually thought of my grandmother as having legs; for as long as I can remember she suffered knee problems, and then for the last fifteen-twenty or so years she had either been using a walker, very slowly and painfully. In her last year of life, she had been confined to her armchair, and finally, a hospice bed. But I know when she was younger she would carefully crouch while tending to her vegetable garden, kneel reverently whilst cultivating her otherworldly roses, and spend time on her back porch feeding her beloved birds, spryly chasing off the chipmunks and squirrels from the seeds in winter, sitting cross-legged watching for deer and rabbits at the edge of their heavily wooded property in the spring.  Seeing her pretty legs stretched out in the summer sun like this makes me so happy, especially when I reflect upon her last few months under layers of socks and blankets, her pale legs, weak, immobile, and never warm enough. 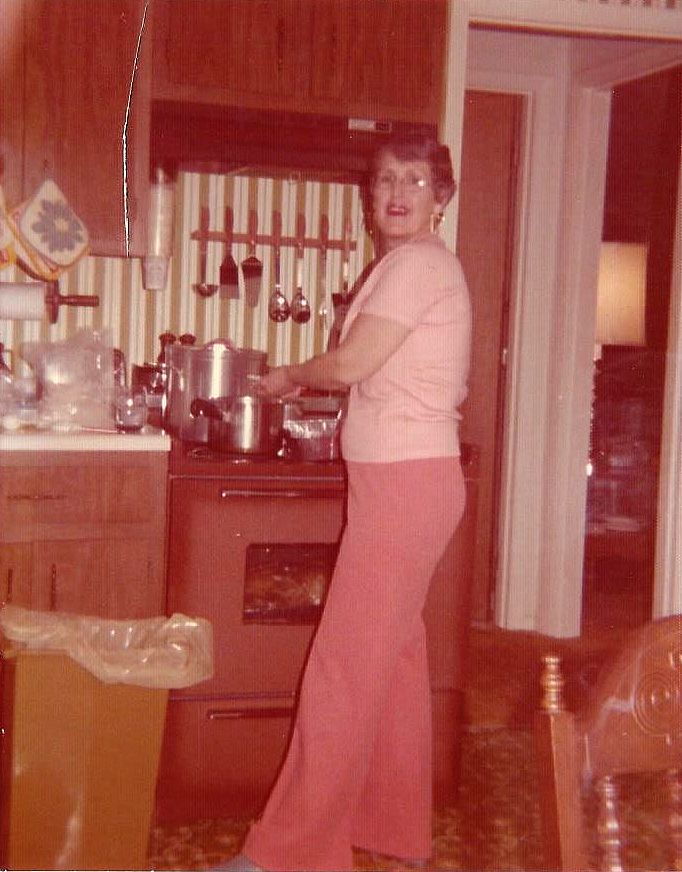 I am forever indebted to my grandmother for bestowing upon me her love of cooking. I received no formal culinary teaching at her hands, but she always allowed me to hover nearby and watch, or give me a turn to stir the gravy, or roll out some dough, or a spoon to lick, while her murmuring of the ingredients and recipe became a gentle incantation that I can still hear when attempting any sort of kitchen witchery in my own home. I remember the fearful curses that flew from her lips when a meringue would droop or a pudding would fail to set, but I also recall the peaceful magics that would beset a room when my sisters and I would tuck into a bowl of chicken and dumplings or Cincinnati chili that had earlier been bubbling merrily away on the stove. She never made me feel like I was a nuisance, or in the way, and she genuinely seemed to be pleased with my company. In later years, when standing became too difficult, she would direct the proceedings from a kitchen chair, while I carried out the steps for new recipes that she wanted to try. She had a grand appreciation for a good meal and a tremendous appetite for all kinds of junk food, too. Last May, when she recovered from an infection that left her bed-bound, the first thing she said when she was feeling herself again, was that she was hungry for fried chicken! She had her priorities straight, we always liked to say. 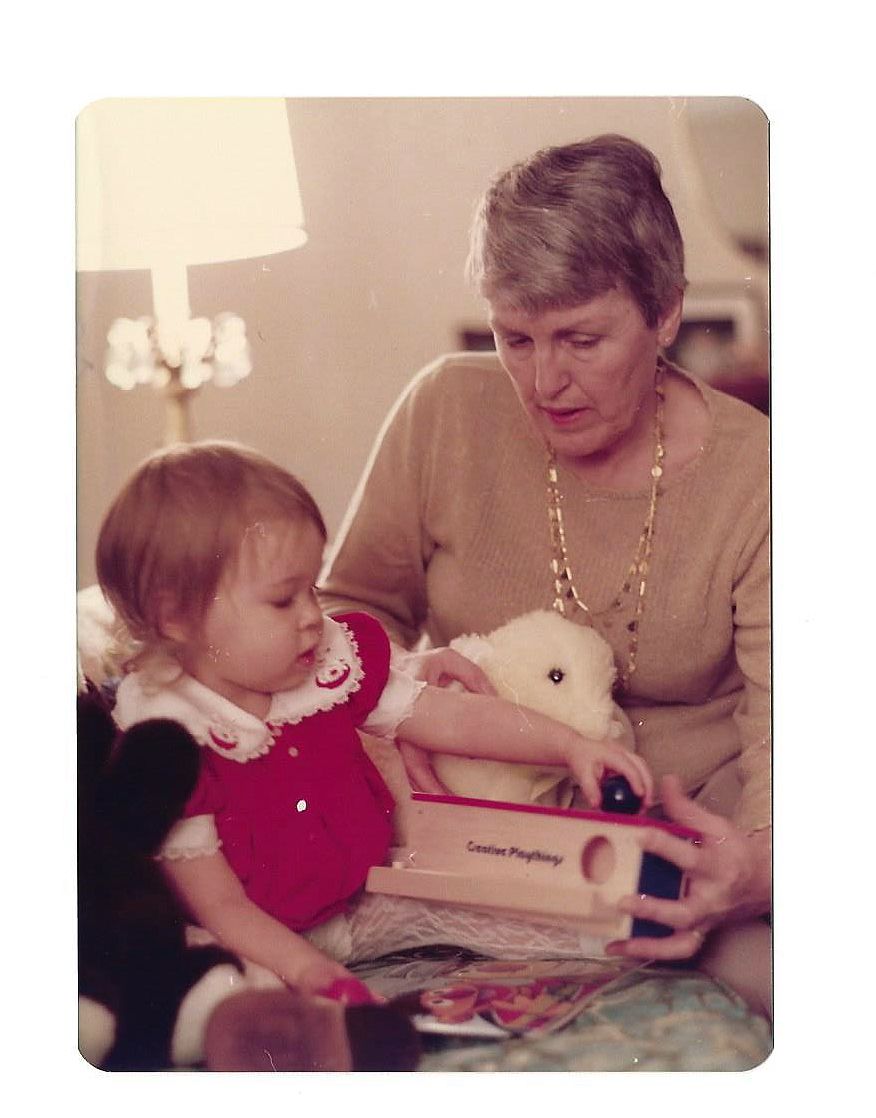 Also, like my grandmother, I am a bit of a magpie. I spent so much of my childhood trawling through her mother of pearl jewelry box and playing dress-up with her dangling earrings and sparkling brooches; everything carried the lingering scent of her signature scent– Estee Lauder’s Youth Dew–and for the longest time I thought that all baubles and gems emanated a musty, metallic tang, a strange witches brew of heady, formidable glamour and aggressive luxury. Even now, stealing sniffs from her almost empty perfume bottle, my memories glimmer and gleam with the treasures associated with that fragrance. Never opals, though. Opals are bad luck unless they are your birthstone, she’d caution me in a dire tone. I’m still frightened of them and to this day, I won’t even touch an opal.

An astrology enthusiast who insisted she had the second sight, my grandmother was also, as she liked to remind us, “a good, Christian woman”. This God-fearing woman believed that we absolutely should not date any Scorpios (I wish I had heeded that particular warning) and that she was a little bit psychic; unfortunately her premonitions only extended to bad news and death, and which I personally thought had more a tinge of those “see I told you that’s what would happen”, cautionary energies rather the manifestation of the metaphysical. She was a good woman, that part I know for sure. Our holidays were often crowded with friends who had no families, and to whom she had extended invitations to her home in perpetuity so that they would never have to spend a holiday alone. My own mother was a complicated woman who fought and lost to many of her demons, but my grandmother was always a steady, dependable force who was there for my sisters and me when our mom was not. No one could have taken better care of us; my grandparents ensured that we always had clothes to wear, books to read, and food to eat (we thought that everyone’s dinner table was provided for by a grandmother who drove around with meatloaf and tuna casserole in the trunk of their car).

I owe everything I am to my grandmother…even the weird, problematic bits. She had a morbid, melancholic streak, as did my mother, and I don’t believe that depression develops in a vacuum. I remember her telling me once that she used to write poetry sometimes in high school, and recalling my own flair for melodrama, I was not the least bit surprised to hear that. Depression for my grandmother took the form of long naps and early bedtimes, and when I cannot bestir myself in the morning because of a gloomy mood, I know it for the echoes of her unhappiness running through my blood.

She loved true crime novels and sat spellbound watching dramatic court cases. She enthusiastically perused celebrity gossip magazines and oddly enough, thoroughly enjoyed South Park. I think she found the nature of human drama utterly fascinating, even and especially the sensationalist kind. But as much as she enjoyed connecting with people, she hated talking on the phone, and would only use the telephone in the event of an emergency. I too am made anxious at the thought of phone conversations, and I loved her for assuring me that we weren’t the odd ones for having that aversion. We were perfectly normal–it was the rest of the world that was weird.

And no matter what we believed, or said, or did, or didn’t do–she thought her granddaughters were smart and beautiful, and perfect.

And this sage, strange, weird, wonderful woman, oh, how we thought the same of her.
We’re going to miss you so much, Mawga.

4 Comments on Our Mawgas, Ourselves