I haven’t been able to find much information on Mahyar Kalantari, a fashion and beauty illustrator on Behance, whose digital stylized couture illustrations I fell in love with just last week. (Although I have found him on deviantart, tumblr, and instagram.) So while I’m digging up the deets, please to enjoy some of his fabulous art, below! 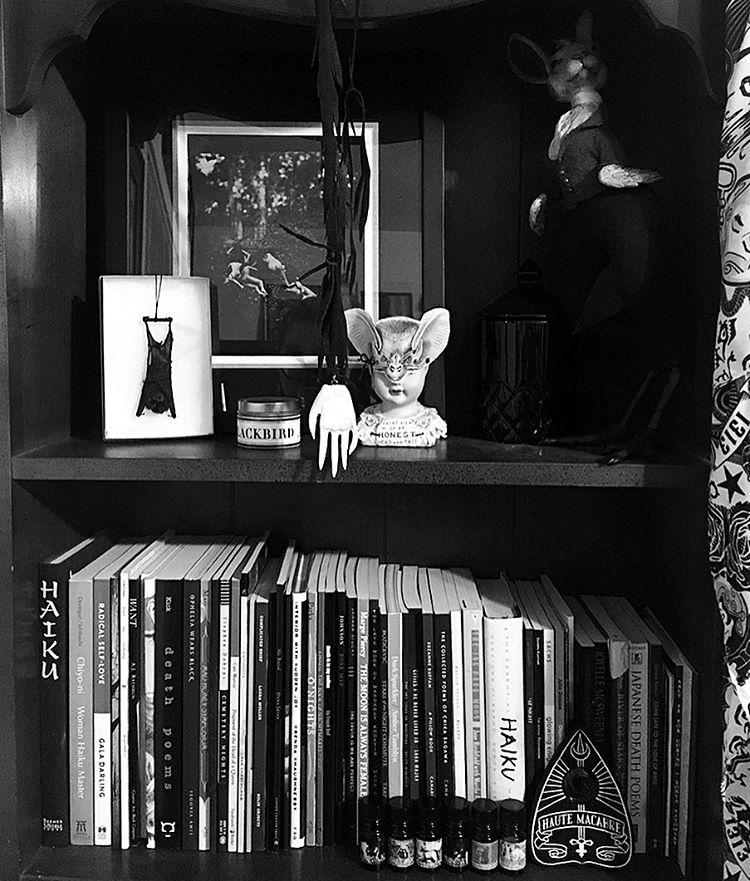 This past month has seen a slow shift into a less hectic pace and has presented me with more time to focus on things I have been neglecting. The past year has been so busy, especially the earlier part of the summer, and so it was easy to ignore things piling up…as in literal, actual piles and stacks of things that just kept growing and slowly taking over the entire house. 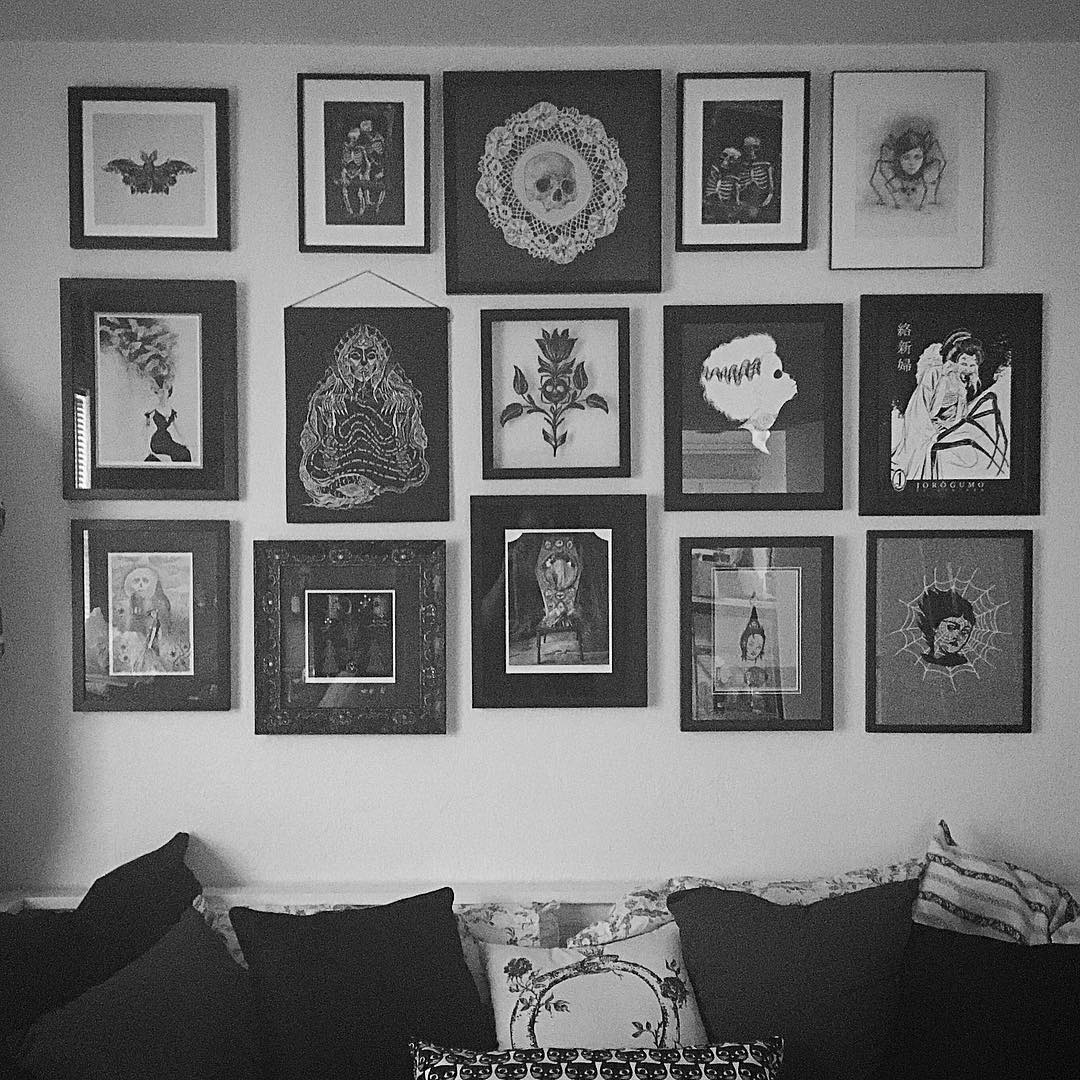 I spent the greater portion of August getting these things sorted and settled. Stacks of books were dismantled and properly shelved. Art was hung on walls, makeup and brushes were given a home, and jewelry is now untangled and on display. It’s about time. 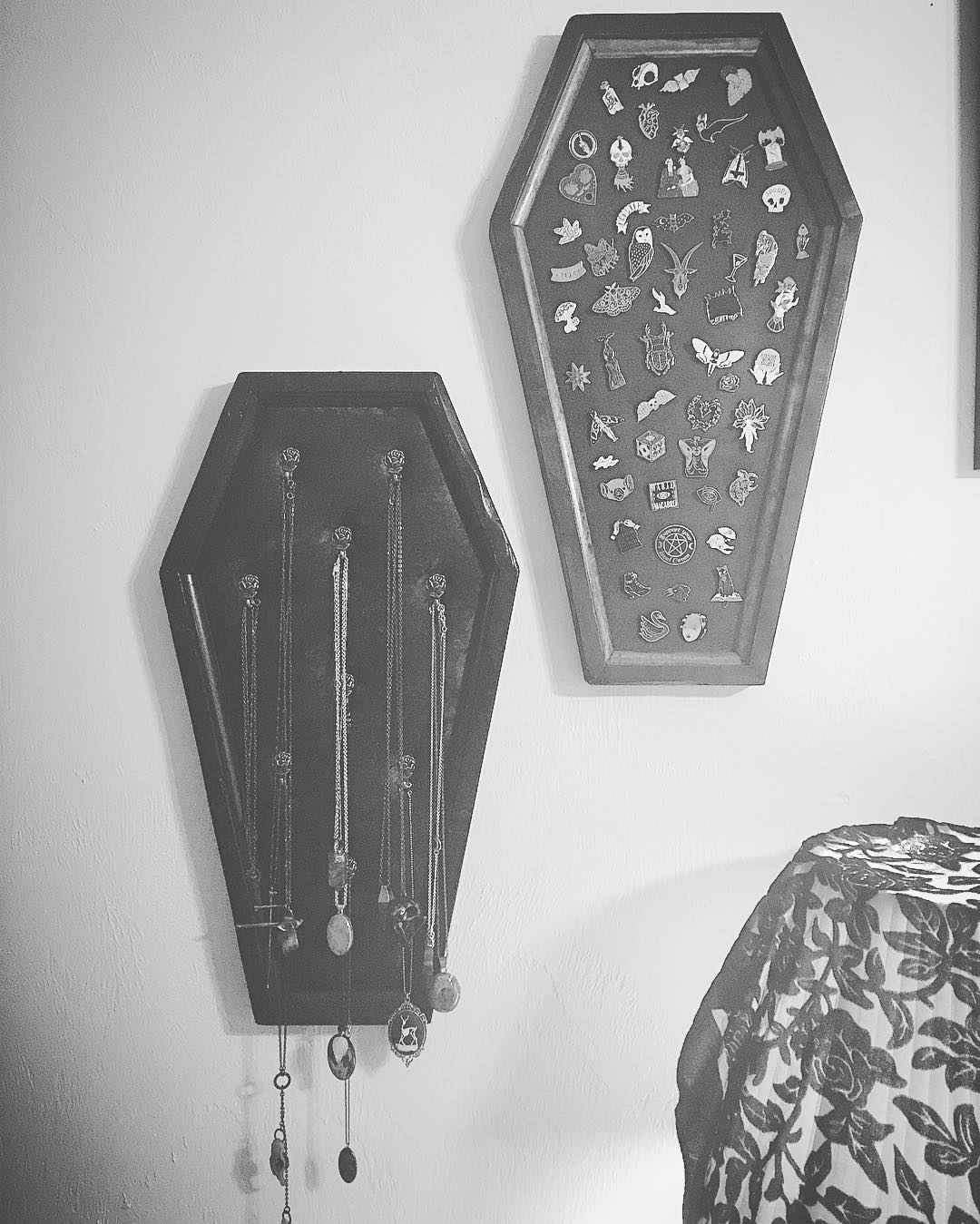 If you’re curious about the coffin shaped pin boards and jewelry hanger, they were created by brilliant folks over at Life After Death Design, and I’ve written about their marvelous virtues previously. 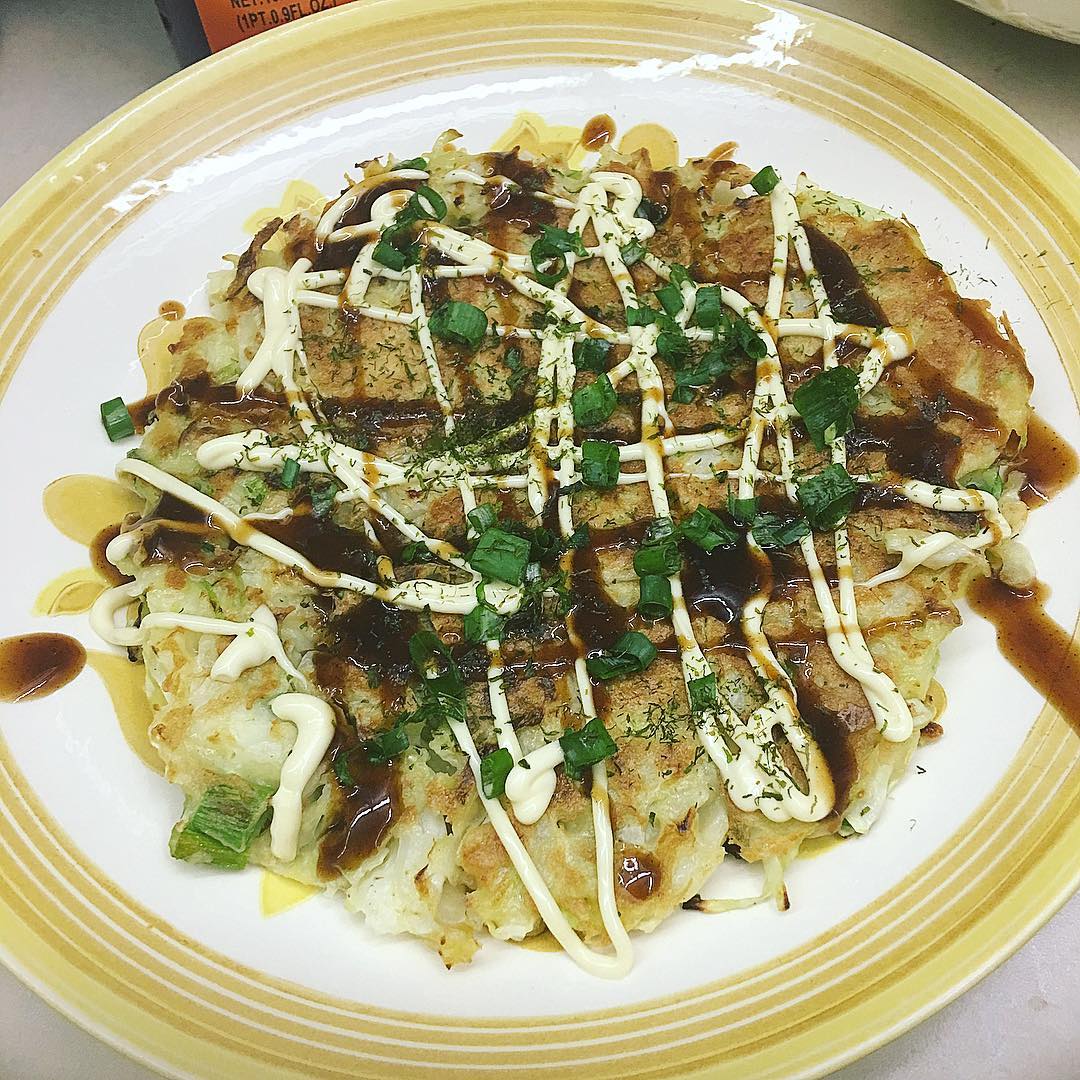 Currently I am obsessing, just a bit, over okinomiyaki…which, if you don’t know what that is, it’s basically (as far as I can tell) just a savory Japanese pancake. I think it usually always contains cabbage, but from there you can probably add whatever you like: shrimp, pork belly, chicken, sausage, squid…whatever. Or maybe shredded carrots and lots of green onions, if you don’t want to add any meat.

I see some people refer to it as “Japanese pizza”, but maybe that’s because it seems a bit like junk food? Or maybe because it’s a flat disk-like food with lots of toppings? Who knows!  Anyway, here’s a basic recipe for it, and it’s fairly easy to make. You mix a bunch of stuff together, fry it, throw some other stuff on top, and serve it.  Here’s a shopping list for the items that might present more of a challenge to locate, if you wanted to make it for dinner tonight: okonomiyaki kit // dashi // bonito flakes // kewpie mayo // okonomiyaki sauce 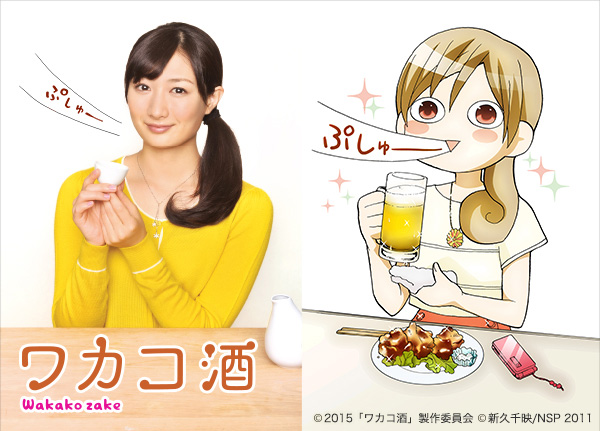 How did this okonomiyaki obsession begin? Well, I blame it on Wakakozake, an anime I started watching last year. Shown in 2 minute episodes, it follows Murasaki Wakago, a 26 year old woman, who likes to go out to dinner or for a snack and a drink, every night after work. Somehow, they took that concept and turned it into a half an hour live action show (or maybe the animated short came second? I’m actually not sure.)

On the surface, it’s not very complex: our main character picks a restaurant or a bar, she orders something and eats it, musing on its delicious qualities all the while. Sort of like a food blog, I guess, but much less pretentious. Wakago can be silly and is a bit of a day-dreamer, and there’s such a lovely lack of artifice in her observations. Also, I loved what this reviewer had to say about it, and after reading this, I really did start to think about the many layers of Wakakgo’s reflections and interactions. And although, as the reviewer notes, the show barely scratches the surface of this way of thinking. It’s fascinating.

“I think one of the best things about this series is how it both introduces and scratches the surface of a side of Japanese thinking and approaching food that is very specific and methodical, yes, but even that touches on something that is very characteristic of traditional cultural aesthetic values in Japan – there is not only a right way to prepare food, but to eat food, and to evaluate, criticise and appreciate what is placed in front of one.”

Sometimes I will prepare dinner, and depending what sort of mood we are in, we will either have our meal at the dining room table, or sit in front of the tv and watch something. Lately, my response to the question of “what shall we watch?” is “I want to watch the lady eat!”
Nope, I’m not creepy or anything. 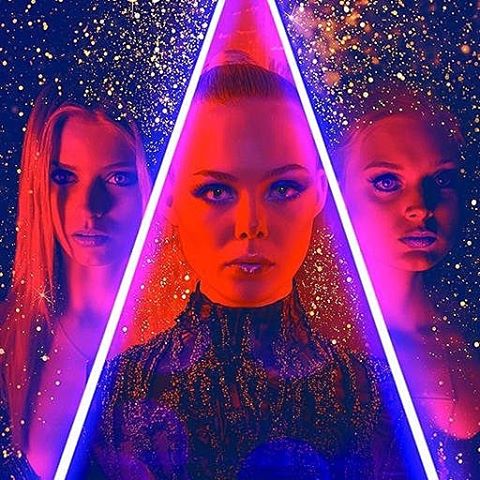 Some more one-word reviews for you on films I have recently watched:

*these titles can be found on netflix 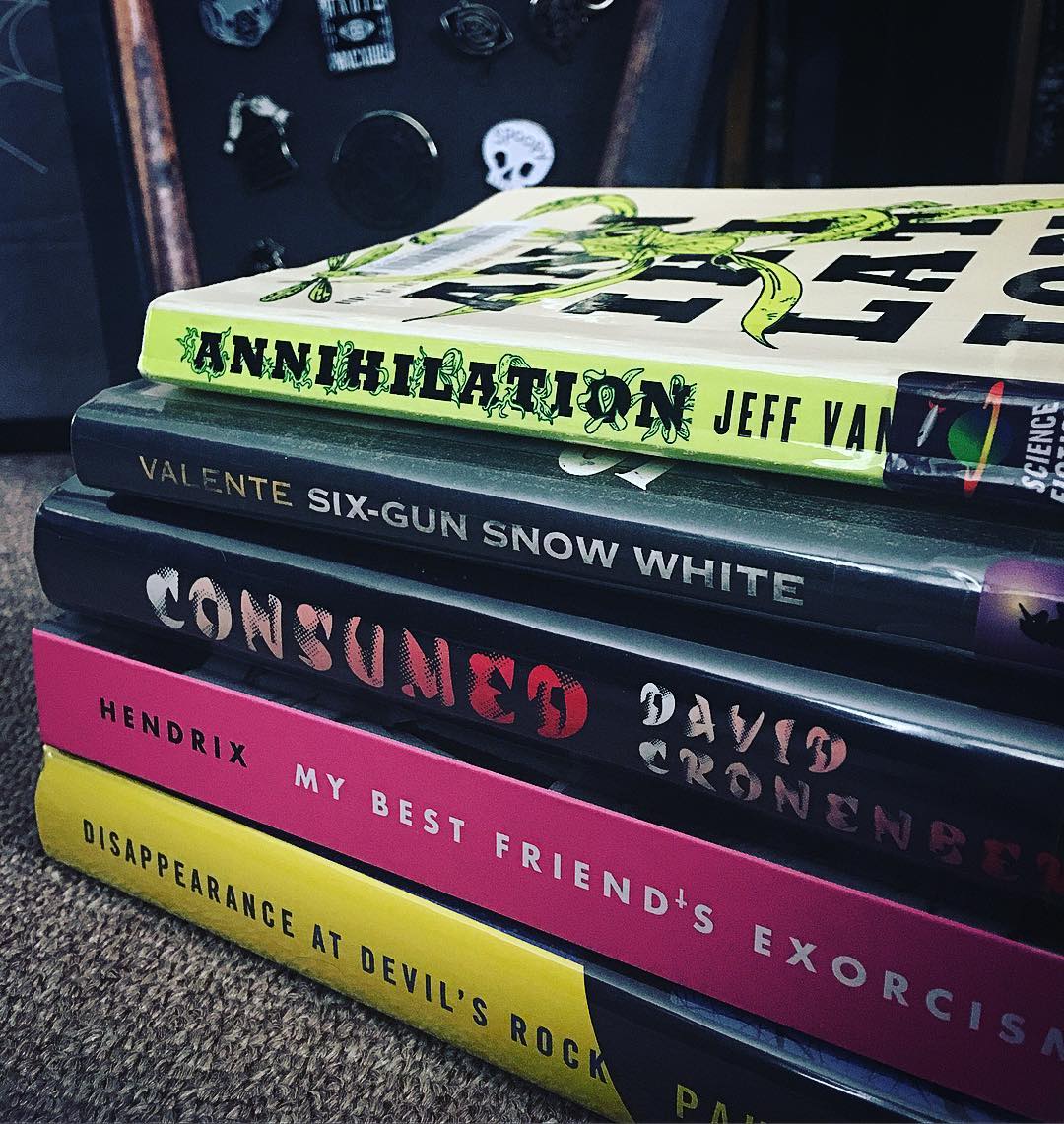 I just finished Jeff Vandermeer’s extraordinary Southern Reach Trilogy (Annihilation, Acceptance, & Authority), and now I’m at a bit of a loss and I don’t know what to do with myself–the perils of reading something so wondrous that you just don’t think anything else can measure up! The books tell of the mysterious, dangerous wilderness of Area X and the humans exploring it: several decades ago, an inexplicable environmental change occurred and a large swath of land and sea was sealed behind an invisible and largely impenetrable barrier. “Inside it, nature shifted. It grew wild and pristine, dense and fertile—improbably pure, as though nature had said “Enough!” and reclaimed itself.”  It’s an uncanny, and genuinely surprising read that haunted me for days and probably will continue to do so for a long time to come. With this series The New Yorker refers to Vandermeer as The Weird Thoreau, and …yeah, I totally see that.

Also read, to some degree of enjoyment or another:

My Best Friend’s Exorcism by Grady Hendrix — this was quite fun!
Consumed by David Cronenberg — didn’t love it, but glad I read it
Disappearance at Devil’s Rock by Paul Tremblay — suspenseful and compelling.
Preacher Book One — well, I had to read this sooner or later
Sex Criminals Volume Three — still enjoying this, though the meta-narrative is getting tedious
Ghostie Boo by Kate Litterer — a book of poetry that I am still musing on. I am not so great with sussing out the meaning of or analyzing writing, especially with abstract writing like poetry. Often times I have to read reviews or interviews to get a perspective, and then return to the source and re-read. I am aware that in doing so, I might be unduly influenced by thoughts not my own, but sometimes, well, that’s the only way it works for me. I’m telling you this now because you should buy the book, read it, and then read this terrific interview of Kate Litterer by poet Sonya Vatomsky, who asks some thoughtful, illuminating questions. 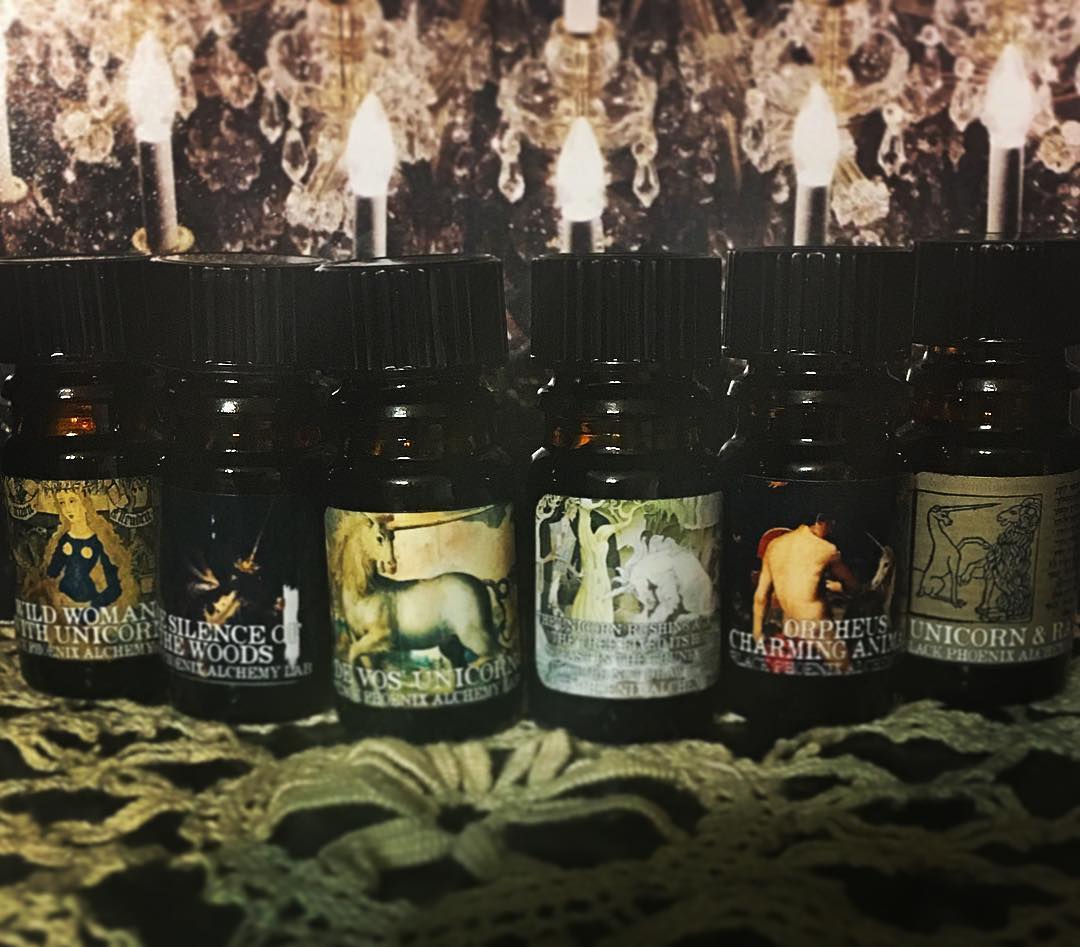 Currently smelling: the few offerings from Black Phoenix Alchemy Lab’s The Art of the Unicorn collection. I have not yet made much headway, but I can tell you that De Vos’ Unicorn (sugared peony and rose-tinted vanilla with mallow, white musk, lavender buds, and a touch of apricot) smells like a brothel run by a flock of scrumptious marshmallow peeps. But like, peeps if…they weren’t purchased stale and on sale after Easter, but rather if some enterprising, over-achiever foodie made a bespoke, hand-crafted batch of peeps. After a few hours, the scent softens becomes very much like my beloved but sadly discontinued Antique Lace, so it is definitely going to be hoarded away.

Incidentally, did you know that the collective noun for unicorns is a “fondle” of unicorns? Well, according to Wondermark it is. I’d like to add that it’s no doubt a “glittering fondle of unicorns.”

I spend a great deal of time piddling & dinking around on the internet and in the doing so, I stumble upon all manner of fascinating things. A few things that have recently caught my eye/piqued my interest/whipped my grey matter into a maelstrom…

Mothography by Warren Krupsaw   These wee things sat on the photographer’s finger!

And new music from favorite artists! See below for new videos from First Aid Kit, Jolie Holland, and Julianna Barwick.