Remember the little concessions jingle in Regal theatres that they used to play before the trailers? People dressed up as concessions snacks, they are giving themselves pep talks about how they do their gig with style and panache, and one of them is refusing to go on because he played Hamlet, dammit! And then they sing:

“Don’t talk in the movie,
no cell phones in the show,
and smoking is a no, no, no!
And remember to throw your trash awaaaaaay!”

It’s got a whole story arc, and everything.

Anyway, there’s this guy peeking into the dressing room as you can see in this blurry terrible video and he shouts “5 MINUTES!” and…I used to lose sleep wondering whatever happened to that guy. Was that the end of his career? Or just the beginning? Now, after binge watching four seasons of the Gilmore Girls, I am pretty sure I have my answer.
The 5 MINUTES guys is “Joe” in the Gilmore Girls.

Here he is, older and with more facial hair, standing awkwardly behind Kirk. IMDB says that Joe is played by a Brian Berke who looks to have had an abysmal career (his only other notable role is Ron Jeremy?) and no mention of concessions jingles in movie trailers but I don’t even know if they’d list that.

What’s frustrating is that I know I did not go to the movies alone, there were other people with me and we all saw the same dumb crap before the movie started…and yet no one remembers this!  How can this be.  I am still losing sleep over it. 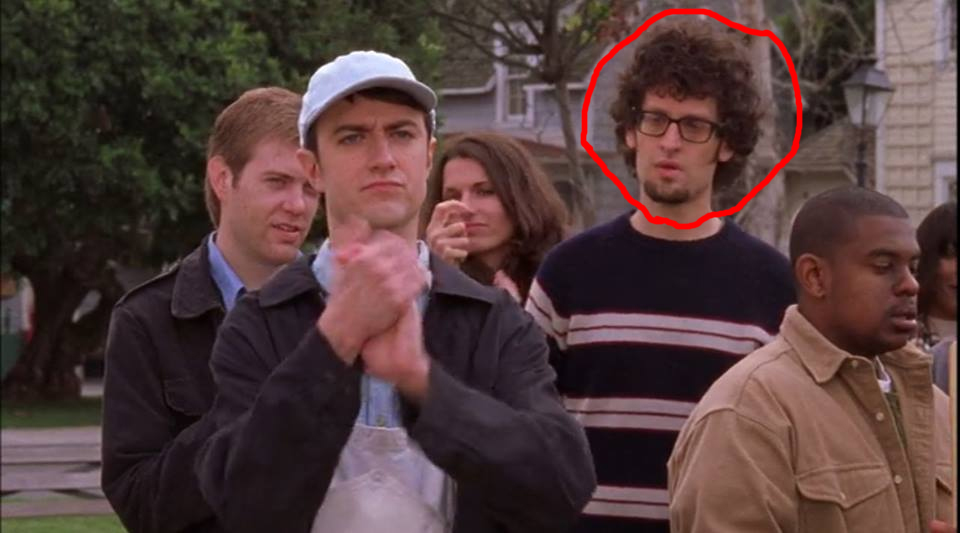 Thing two is frustrating for a different reason.  My sister and I have a similar memory of a thing but we have no idea how to even begin looking for it because it’s just a small snippet, a foggy filament of a thing.

On Saturday mornings we’d be out of bed very early for Saturday morning cartoons.  Probably from about 7:30 to 10:30 or 11:00, if memory serves correct.  Toward late morning though, I feel like the programming would start to change to things geared for older kids?  Some of them had an “after school special” type feel, and not really episode by episode stuff, more like one-off things.  One of them, the one we are thinking of was a bit of a ghost story (I think).  I get the feeling we never finished watching it, even though it may have been shown a few times over the years.

Basically a girl moves into a new (old) house.  She may have a brother.  Weird things start happening around the house.  The one thing that both my sister and I can agree on is that one point as the girl (and maybe her brother) watch, a baseball starts rolling up the steps. Or maybe rolling down.  Now I am getting confused thinking about it.  So there’s a ball and there’s stairs and it’s really creepy because there was no reason for the ball to be there and no one was anywhere near it to give it a push.

That’s it, that is all we remember. And that is sort of a thing that is impossible to research, isn’t it? I would love to know what it was we were watching but how do you even begin to look into something like that?

I did do a bit of a search for Saturday morning tv schedules in the 80s and though it did make me momentarily nostalgic (Dungeons and Dragons was the best show), it proved ultimately useless.

In thinking about that show, I almost feel it had an eerie Nickelodeon “Third Eye” vibe to it, except I am almost certain that it was on a channel like ABC.  Sigh.  Maybe we will never know. Whoa Whoa Whoa.  Even as I am typing this, I am remembering something.  ABC Weekend Special? Maybe? Yes? It’s gonna take me forever to go through all of these, but I am nothing if not excellent at avoiding real work and immersing myself in weird projects, so let’s do it.

EDIT: HOLY CRAP I FOUND IT. The Haunted Mansion Mystery.  Has anyone else seen it?
Is there anything you remember from your childhood that plagues you because you don’t recall the exact details and it feels like a strange dream or someone else’s hallucination? Were you ever able to track it and pin it down for examination, like so many butterflies under glass?  I would love to hear about it and how it’s haunted you over the years!