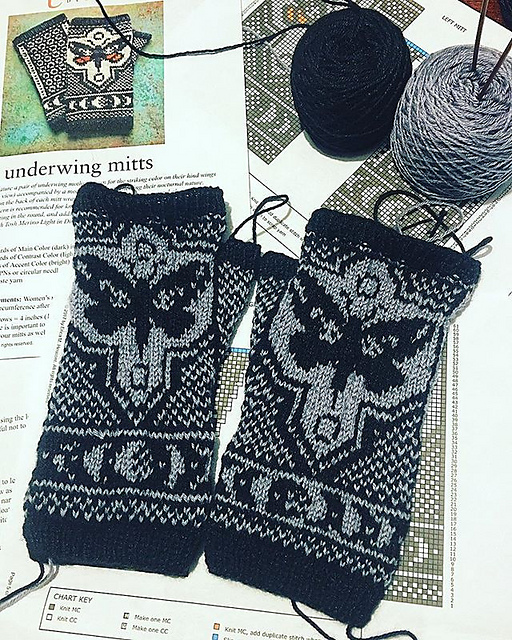 I knit a decent amount of things in 2019, but I did slow down over the summer when I was meant to be working on some other things. I still knit a little here and there, but I guess I was feeling guilty about doing anything other than the task at hand. I felt furtive and underhanded about those sneaky stitches, like I was somehow doing knitting crimes, and let me tell you, I did not care for that feeling at all.

The above Underwing Mitts, pattern by Erica Heusser, were knit at the very beginning of the year, before all of the aforementioned criminal stitchery. I think I actually cast on at the tail end of 2018, but they were my first finished project of 2019, so it counts, I think. This was the first colorwork project I’d ever actually completed, and I guess it wasn’t so bad, but it wasn’t so great I went back for more, either. Like most things I knit, I have since given them away to a dear friend. 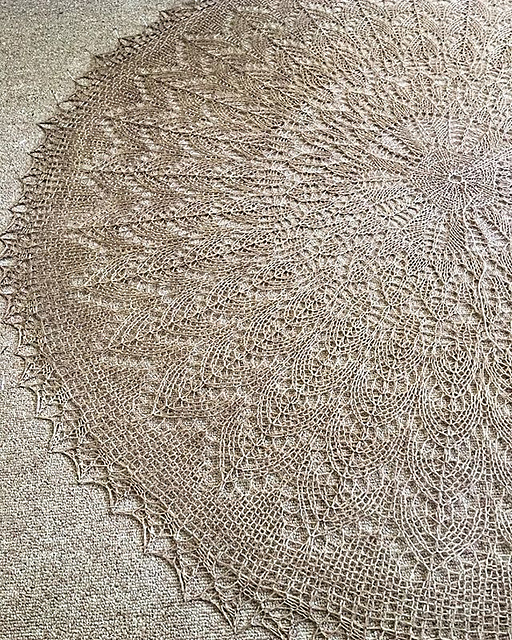 I always love knitting Caitlin ffrench’s patterns and the exquisite Jörð was no exception.  I think I might have screwed this up somewhere after one of the repeats where the stitches doubled. My stitch count was correct, but somehow it seemed like…parts of the pattern…just…didn’t match up? Ah, well. I just kept knitting. I have no idea where this one ended up! To be honest, the homes in which the majority of last year’s knits currently reside is a mystery to me–I have forgotten where I sent them all! 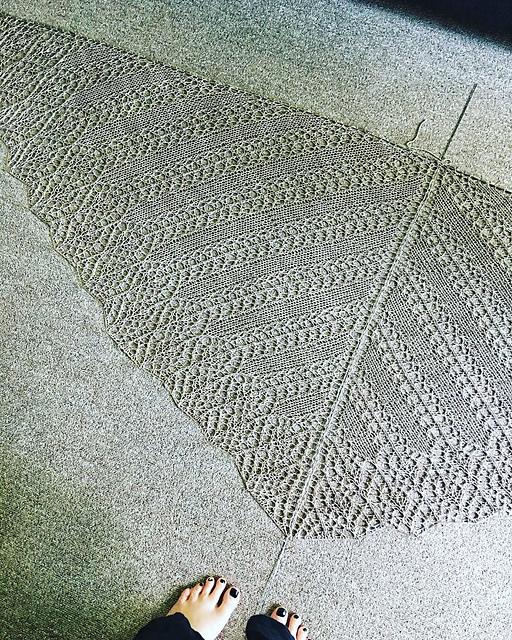 Clothilde by Kristen Hanley Cardozo was a lovely and simple knit, or at least I don’t recall it being particularly challenging. I really don’t remember much at all about it. But it turned out quite lovely, and I was quite pleased that I had enough yarn leftover from Jörð to create an entirely new and separate thing!

The Swallowtail Shawl by Evelyn A. Clark was a pattern that was all the rage in 2006 or so, when I was a wee fledgling knitter. I recall seeing all the popular knitting bloggers posting photos of that one and thinking to myself, “lordy, I will never be able to do that!” I had quite forgotten about it until I needed a pattern 13 years later that would use a certain amount of a certain weight of yarn, and I thought, “aha! why not!” I wish I could say it was a piece of cake but it was fraught with the intensity of too much pattern left for too little yarn, and I actually did run out of yarn, with six stitches to go. Yikes. 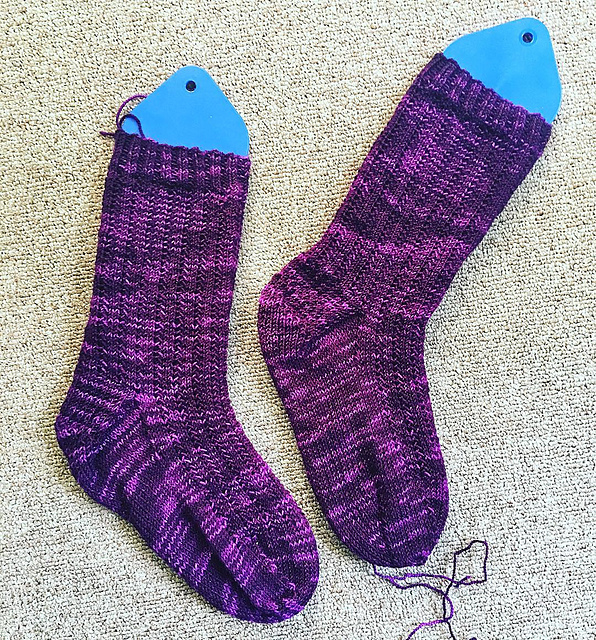 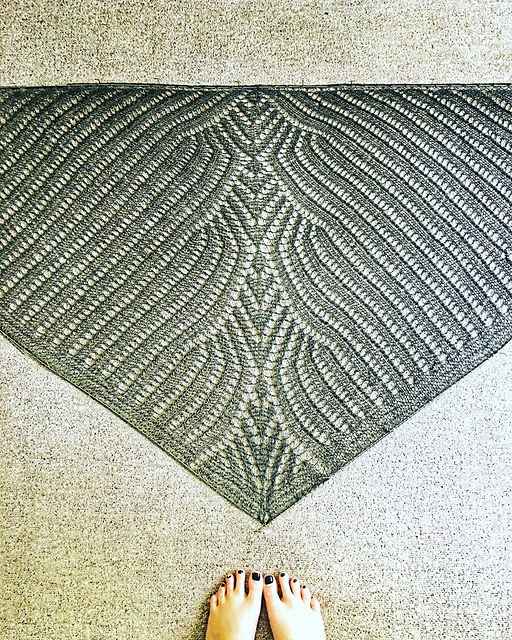 I thought the elegant geometric pattern of Amy van de Laar’s Deco City shawl seemed refreshingly different from the sorts of florid froofiness that I typically gravitate toward, and it coincidentally seemed like a good fit for some Shibui yarn that I’d somehow gotten ahold of (if you are the friend who gave it to me, thank you!) Not sure where this ended up, but it was a joy to spend time with. 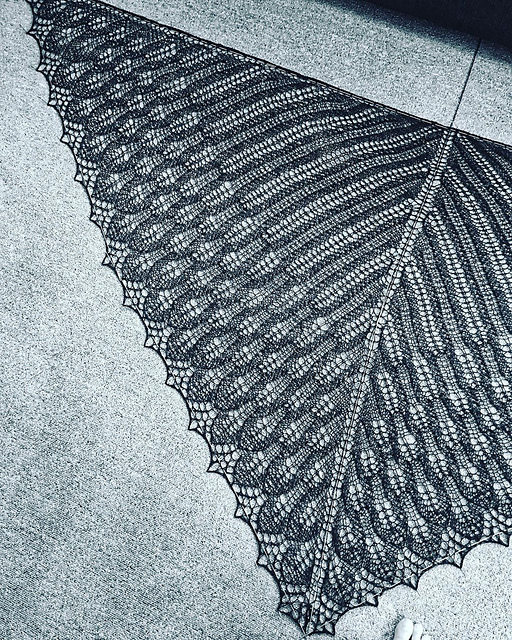 I have Romi Hill’s Bitterroot so many times now. The first time I knit all of my grief into it, after a beloved feline companion died. This most recent time I sent it off to a glamorous friend. This was a humbling sort of project where I was probably overconfident and screwed something up even though (or perhaps precisely because) I’ve worked on it so many times that I should know these stitches by heart. It’s a pretty forgiving pattern, though. It didn’t matter in the end, and it was as beautiful this time as it always is

It’s the Charade socks again! I loved the demented joy and unhinged vibrancy of these colors, so I sent them away to an NYC witch who I thought might appreciate their twisted exuberance. 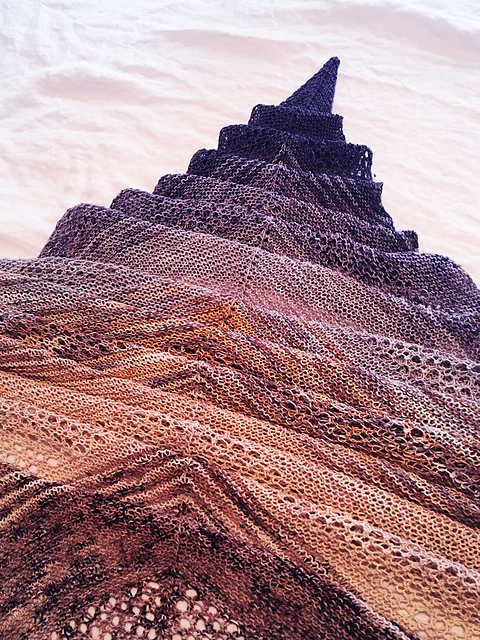 Andrea Mowry’s Find Your Fade, was, in theory, a neat idea. And I can’t say that I wasn’t warned. But this thing was a tedious knit and it is freaking enormous, and I feel like to give it away might be rather punitive to the person who must accept the gift, so for the time being, it still lives with me, crumbled sadly (and massively) in a corner. 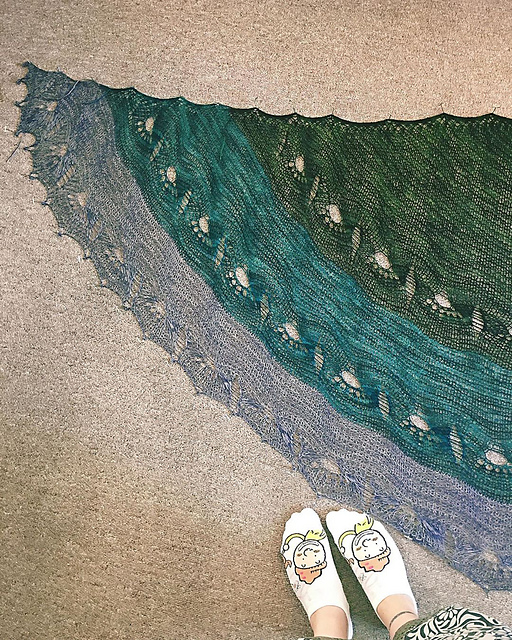 More colors! I usually save the brightly colored yarns for knitted socks, but I had several bits of leftover sock yarn and thought that a colorful shawl might be in order–and from this sentiment, the Odyssey Shawl by Joji Locatelli was born. I often found myself losing track on this project; the number of stitches, the number of rows, even which side I was on! These are good things to pay attention to. I suppose it turned out rather nicely, though! It made its way to a writer and perfumista who I am hopeful might wear it every now and again. 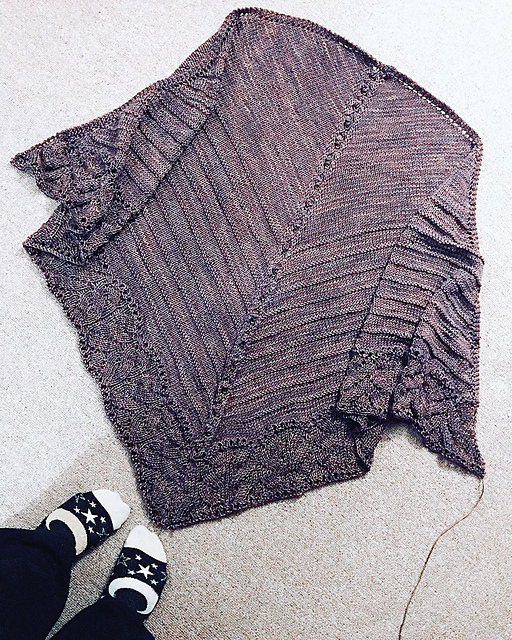 I truly adored knitting Stoker by Kristin Lehrer. This was a soothing project, with the most beautiful yarn. The pattern was perfectly written and though it wasn’t especially complex or challenging, it wasn’t mindlessly stupid, either. Just a really, really nice thing to knit on for a time. It now graces the home belonging to a mistress of cake witchery, and I’d like to think it smells of warm kitchens and sweet frostings and gentle spices now.