I received two Stitch Fix boxes in August…I’m not quite sure how that happened.  Probably something in my settings that I should correct.  I really don’t need this many clothes. I am seriously all stocked up.  And more importantly than that, in talking with my therapist yesterday, we have come to the conclusion that I might be developing a bit of an internet spending addiction (more on that some other time) and I really need to be more mindful of these things.  But that’s depressing, and I don’t want to talk about that right at this moment. Instead: clothes!  This post will be fairly image heavy and light on the wordiness, by the way.  I’m feeling lazy. 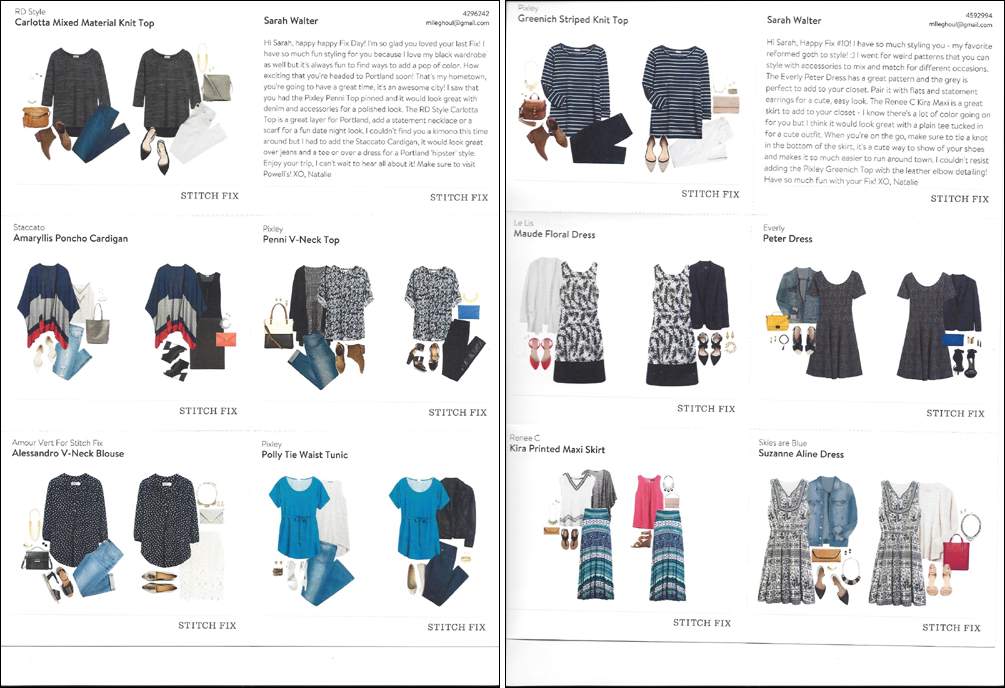 Fix #9 had some interesting and unexpected pieces – definitely things that I would never have chosen for myself, and strangely enough, it was one of the oddest things in the bunch that I loved the most.

First up, the Pixley Penni V-Neck top, size L. I had pinned this; I sort of dig the funky print. Really soft. Slightly tight across the hips. I’ll deal with it. KEPT 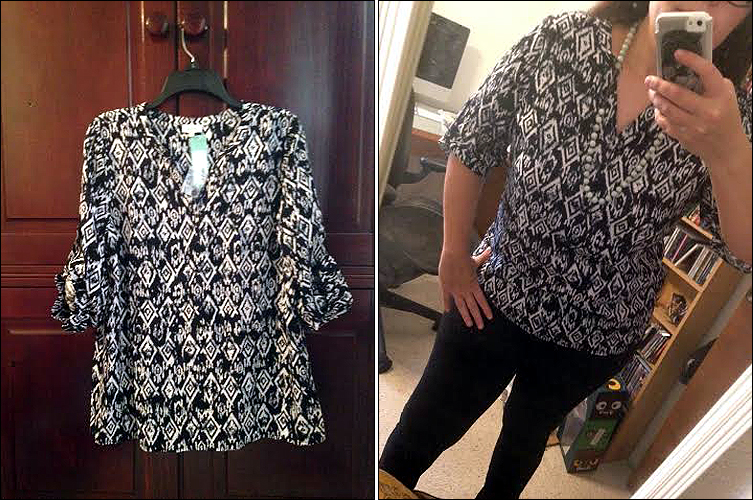 The Amour Vert Alesandro V-neck blouse. $118. And silk. For someone who barely leaves the house, this doesn’t make a lot of sense. Though I strangely don’t hate the hearts. RETURNED. 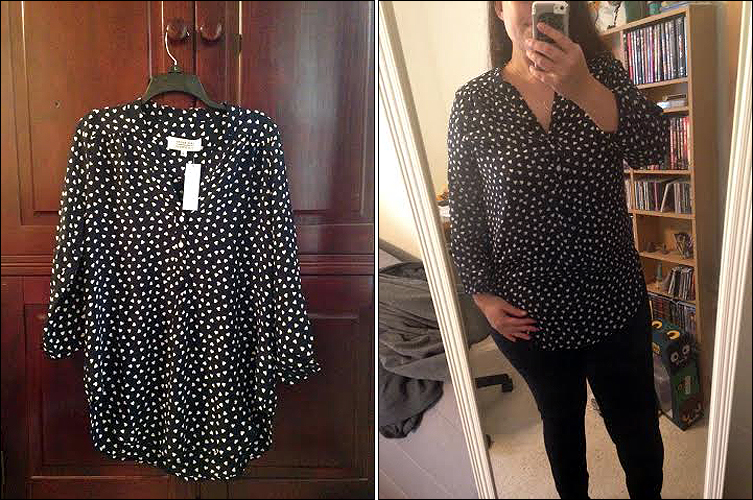 The Pixley Polly tie waist tunic. I love the idea of tunics, but the reality is that they don’t do much for my shape. RETURNED. 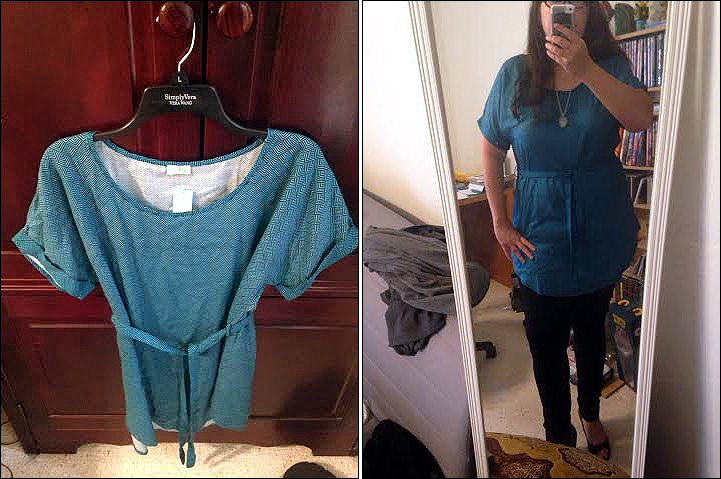 The RD Style Carlotta mixed material knit top was super cute, but unfortunately too tight on me to be flattering. RETURNED.

The Staccato Amaryllis poncho was the surprise sleeper hit of the box. I was sure I was going to hate it. And I pretty much did until I put it on. Now I inexplicably love it. My fella said it looked kind of awesome. I feel like I should be waving smudge sticks around or teaching a pottery class. I’m cool with that. KEPT. 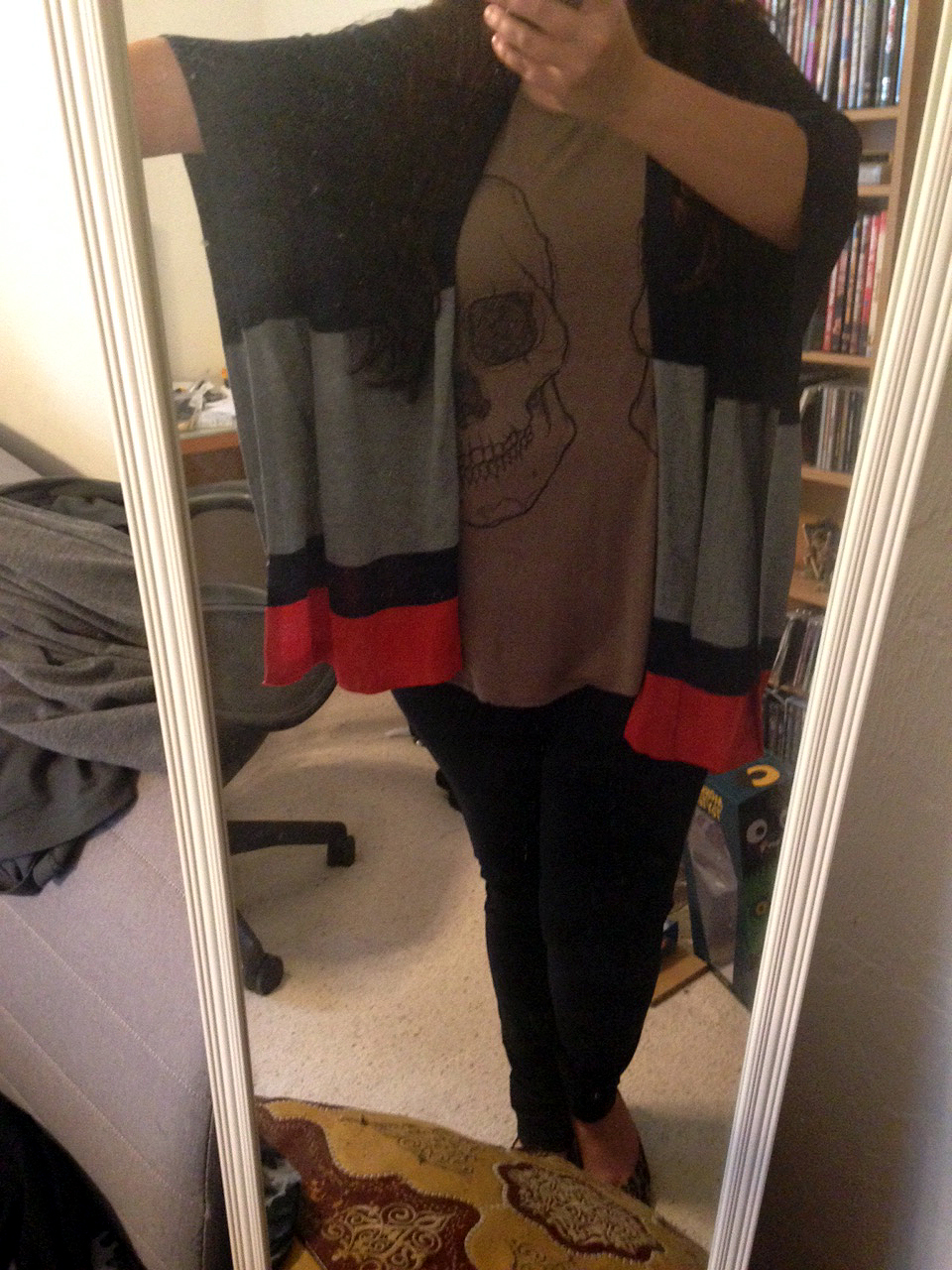 This one had some nice pieces in it too, and an awesome note from my stylist.

The Pixley Greenwich striped top with elbow patches, which is was soft and comfortable and the elbow patches are kind of fun… But I already have several striped tops, so I don’t think I need another. But I kept it anyway and did a huge closet purge after.  Turns out all of my other striped tops were a million years old, some of them even had holes in them.  Jeez. KEPT. 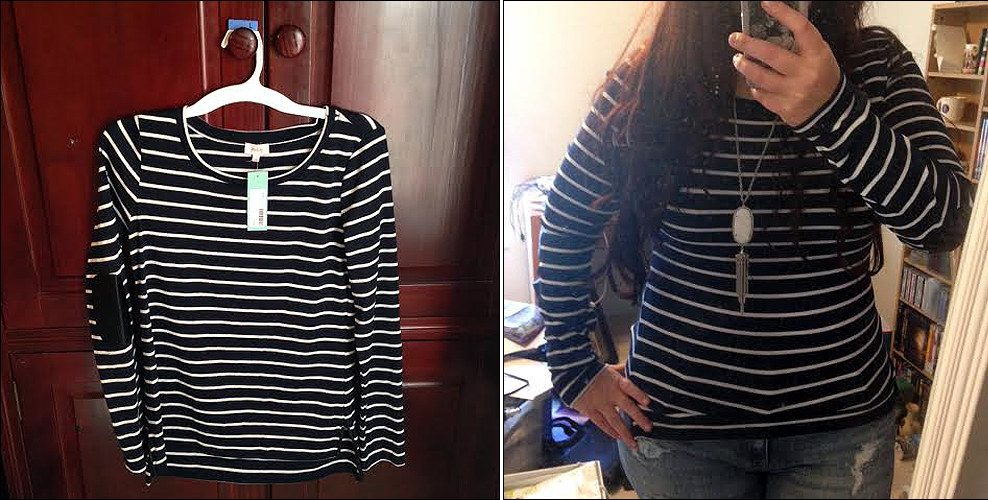 The Renèe C maxiskirt, which is indeed very colorful as per my stylist’s commentary. It’s not that I think I’ll never wear it, I am actually trying to work some color into my wardrobe. Just…not those colors. Also,  I just don’t think I actually have anything to wear with it. Also, I am good at buying maxi skirts on my own. RETURNED 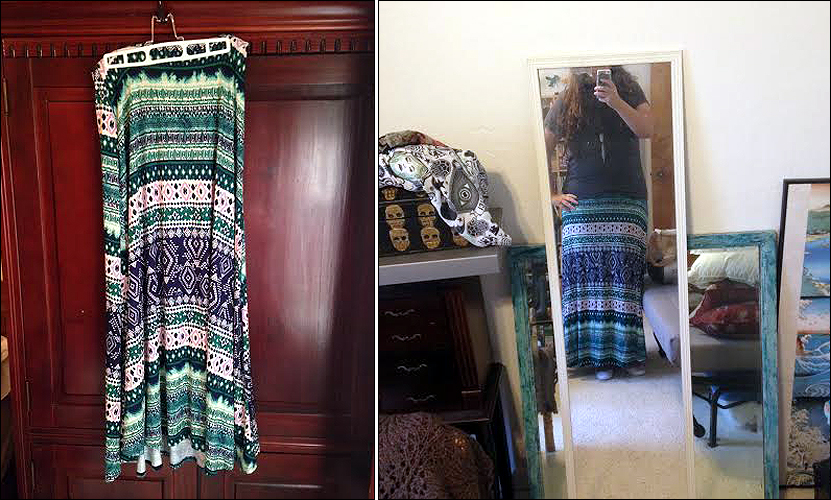 The Le Lis Maude Floral dress. This is really lovely, it truly is. Unfortunately my bum always hikes up my skirts by a few inches, so this feels too short. Worn with a random scarf over my shoulders, because I don’t really do sleeveless. RETURNED. 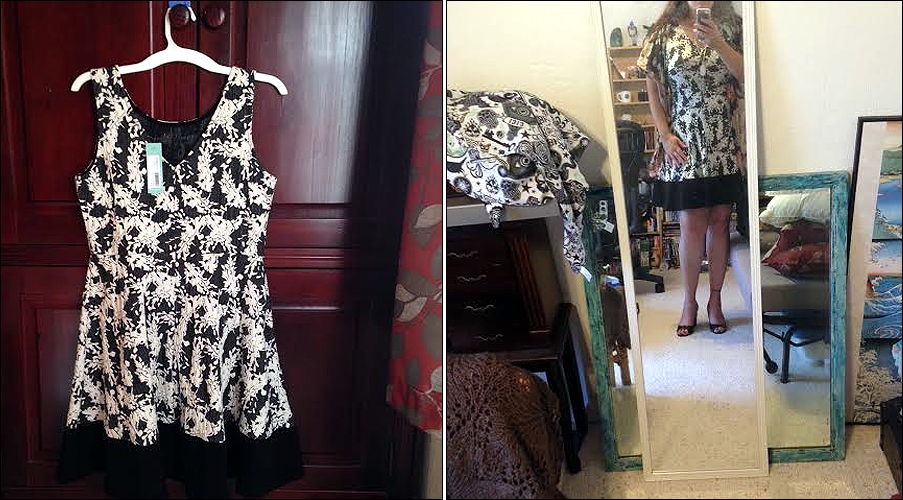 The Skies Are Blue Suzanne A-line dress. I really love this, it’s so soft and the print is quasi floral/botanical something or other and it’s really quite perfect. If I am being honest, I think I like this so much because the pattern reminds me of a china plate. Worn with The Renèe C space dyed cardi from a previous fix because again, I don’t do sleeveless. I don’t know that it is actually the most flattering thing in the world, but it could be the angle, or the cardigan. Or maybe just my lumpy bod. That’s okay, I still kept it. KEPT. 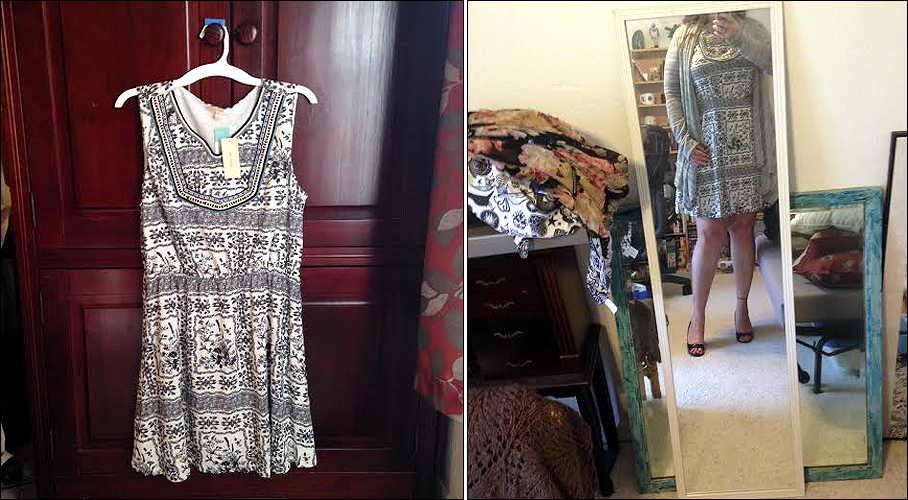 And look at this amazing frock! The Everly Peter dress vaguely reminds me of something from the 1990s. I didn’t have a pair of stompy Doc Martens to wear with it, so I paired it with leggings and some Frye boots. Probably…not how I would normally wear this.  Also, I imagine it needs a belt or something to define my waist a little bit. Why do I always love the things that make me look like I am wearing a sack?  Ah, well. KEPT. 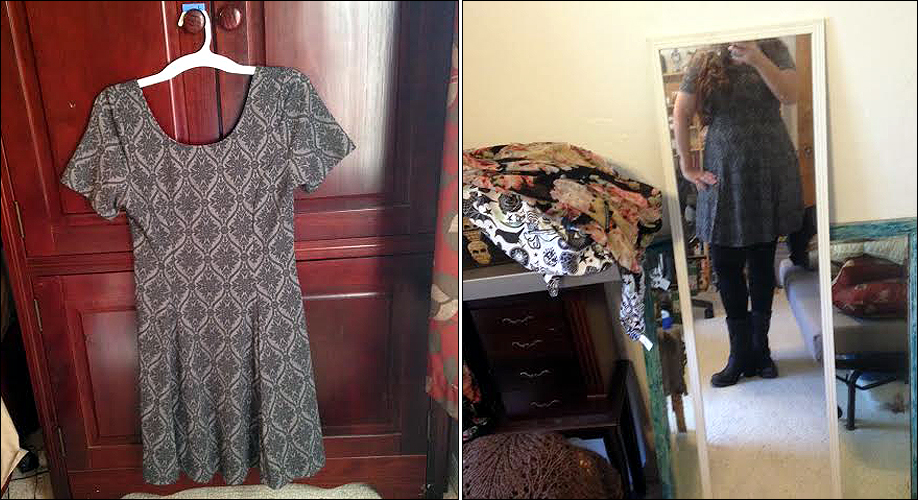 Interested in your own?  Please use my referral code!