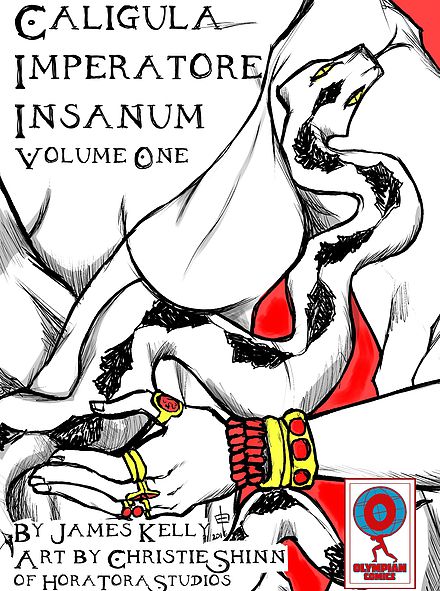 First, a little back story. Christie Shinn of HoraTora Studios and I became acquainted, through, of all things, my Skeletor is Love project that I did back in 2014 or 2015 or whenever that was. Turns out that a mutual love of that bone-headed weirdo and his journey toward positive mental health is a great thing to bond over and a lovely start for a friendship!

I loved her Personal Monsters book, which features the darker sides of human nature (often the ones we wish we could deny in ourselves) and was thrilled to learn of a new project wherein she and writer James Kelly partnered to tackle the subject of Roman Emperor Gaius Julius Caesar Augustus Germanicus, or Caligula.

“Caligula was cruel, vicious, depraved, greedy, arrogant, narcissistic, cowardly, paranoid. But was he insane? Less than 4 years after the death of Christ, the burgeoning Roman Empire is rife with intrigue. A young boy from the Royal family of Caesars has seen his father, mother, and his two brothers killed before he was 13. Now, the young prince Gaius, known by his nickname of “Little Boots” or Caligula, has been given absolute power of the entire Roman Empire. How will the young man deal with managing such a massive empire with no political experience and a lifetime of trauma? Follow Caligula into the madness of the 1st Century of Rome.” 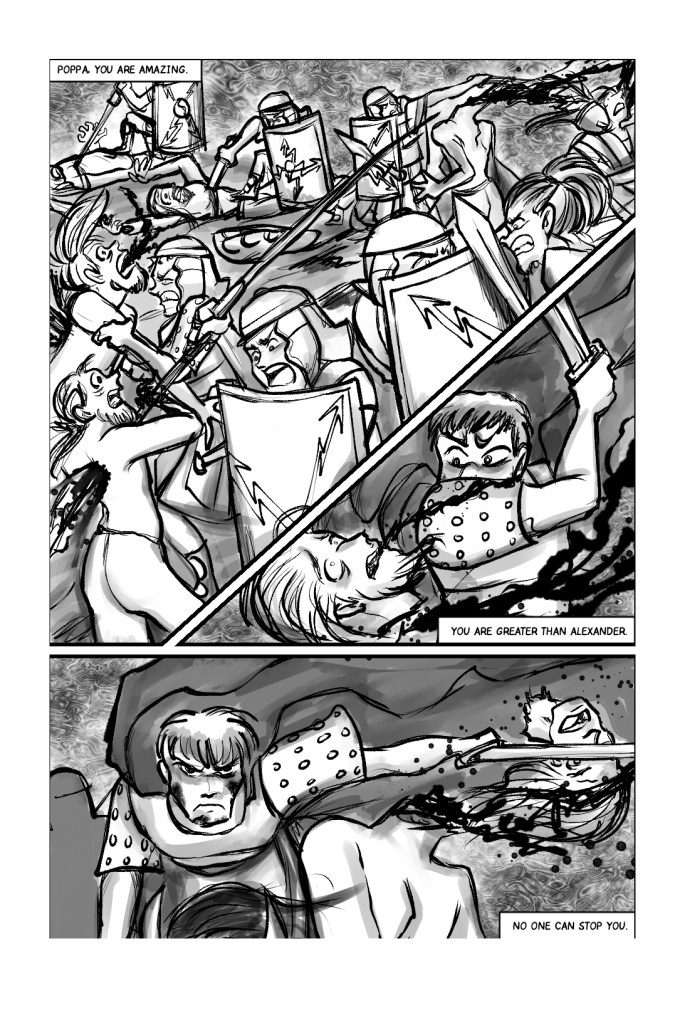 Not totally familiar with the history of Caligula, except, of course for that one notorious film–you know the one–I found James Kelly and Christie Shinn’s Caligula Imperatore Insanum a fascinating, horrific and yes, tragic peek into his story, as well as a fascinating study of the human psyche. And really, just an extraordinary history lesson! For those, that is,  who like their history liberally peppered with murder, incest, and lunacy–and let’s be real, who doesn’t?

To set the tone: In 37 AD, the young Gaius Caligula is the heir apparent to become the Emperor of Rome. Unfortunately, every single day may also be Caligula’s last. The old and paranoid Tiberius has wiped out Caligula’s family and has invited the young prince to his “Pleasure Palace”.

I love Christie Shinn’s art–the bold strokes and jagged edges really do add to the insanity and sometimes frenzied feel of the story…and what a story it is! I’ll admit a little confusion when trying to follow along at points, especially with the time jumps, but I honestly chalk that up to my own ignorance.  James Kelly’s strong voice and clear prose guide the narrative along just fine–and there’s certainly enough sexytimes business and violence to keep things interesting!

I found Caligula Imperatore Insanum Volume I to be an engaging and thoroughly compelling read and I am so excited to see the madness that ensues in Volume II.

If you are curious about the creators of Caligula Imperatore Insanum, here are two great interviews with Christie and James, over at FanGirlNation, and in the meantime, be certain to pick up a copy of the book for yourself.