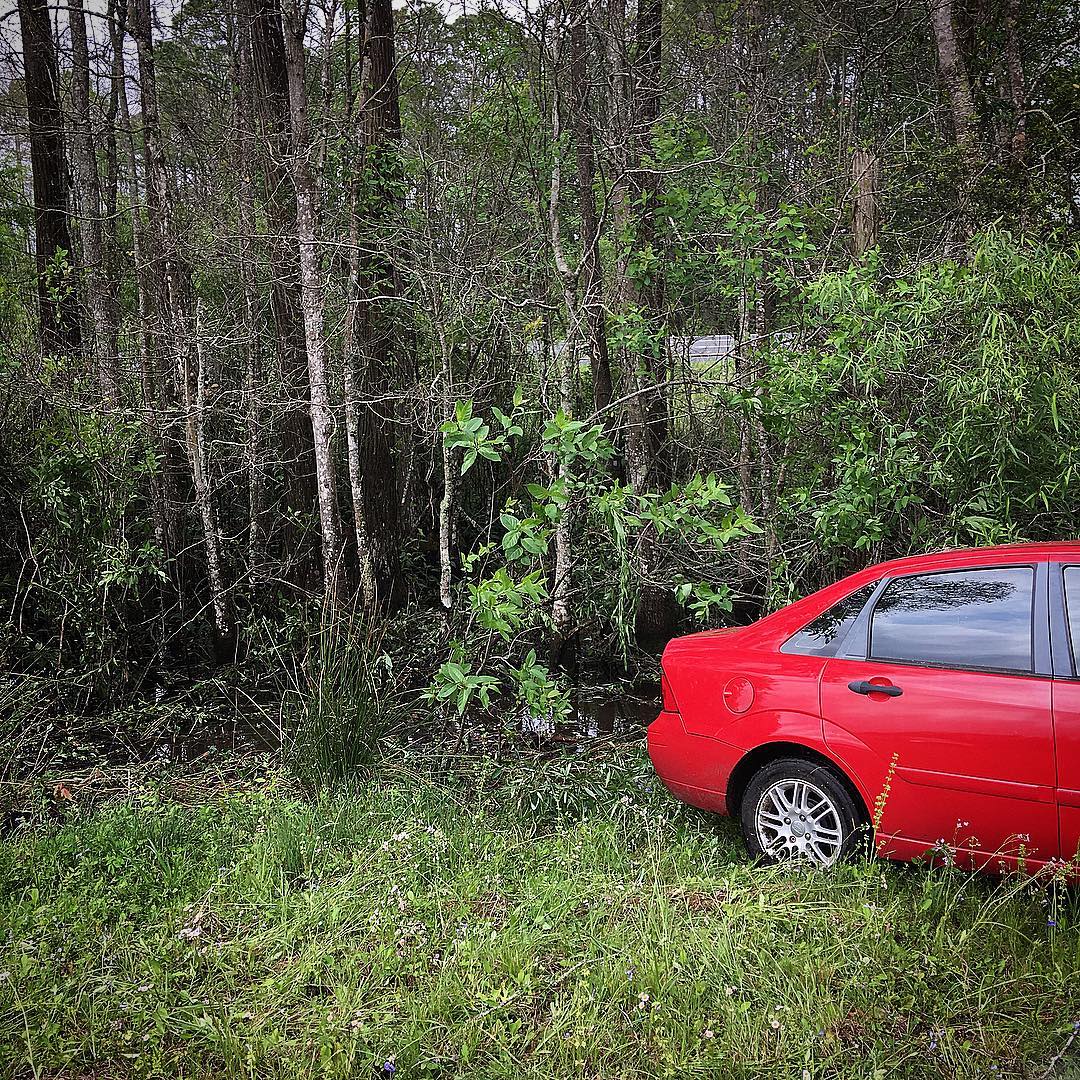 This has been a strange month.

A few weekends ago, on a trip up to North Florida on a rainy Saturday morning, we ended up on the side of the highway, sinking into a ditch.  A massive white pickup truck (I have dreamed about this truck multiple times since then, and I always see it when I close my eyes now) began to merge into our middle lane without looking or realizing we were there. In avoiding a collision with him, we shifted back to an empty lane on the right, but began to hydroplane on the wet roads. At that point, I closed my eyes and began to brace myself for impact.  I don’t know exactly what happened after that, but we were basically all over the road–facing oncoming traffic at one point–and seconds later we ran into a small copse of trees and a swampy ditch in the median between the north and southbound traffic.

I remember looking at the branches scraping at the windshield, noticing our miraculously unspilled coffees and thinking How are we even still alive?

In some parallel universe where my partner keeps a less cool head, this situation could have ended quite differently. The alternate reality us may have ceased to exist that day.
I  don’t care to dwell on that overmuch. 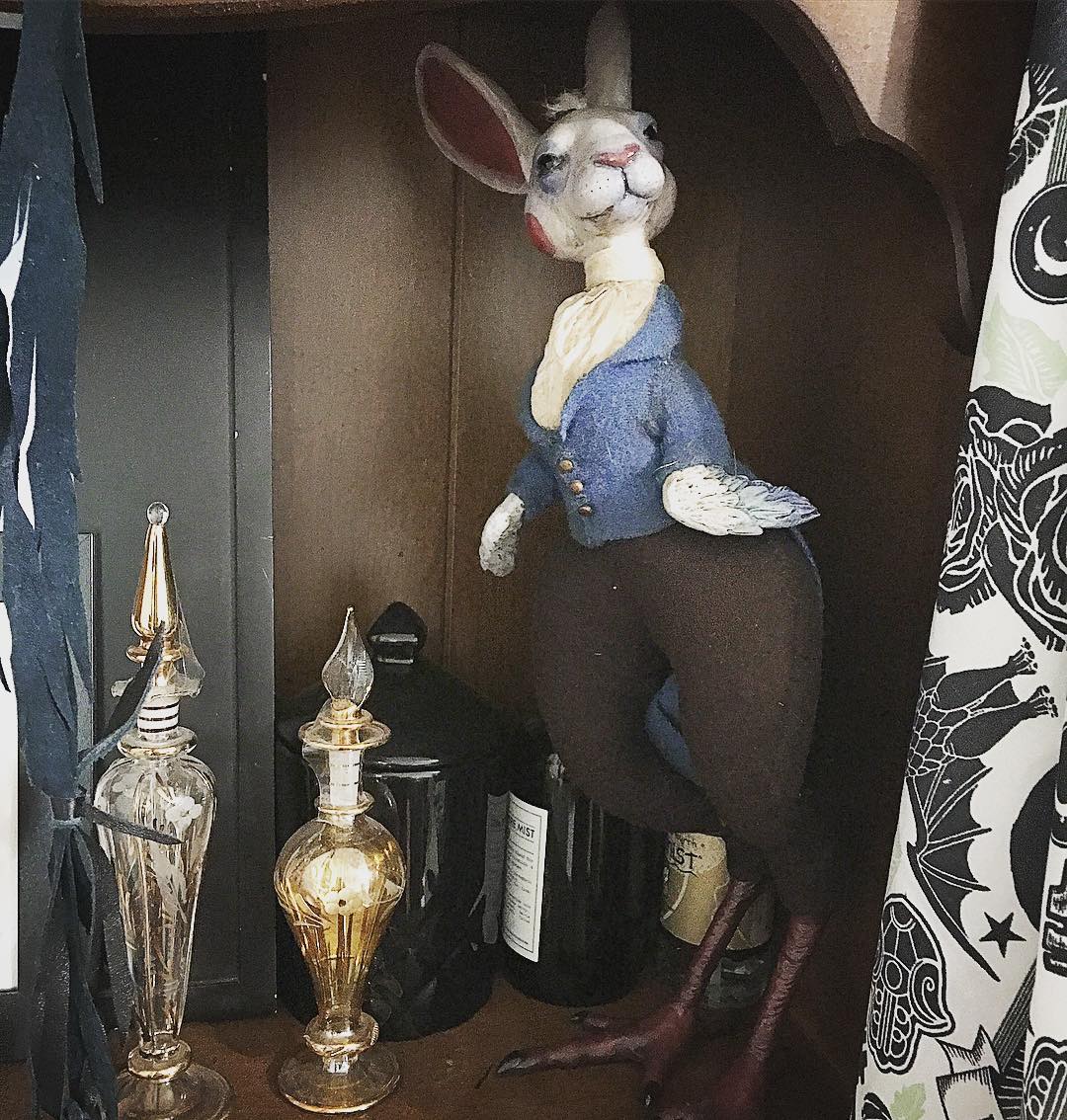 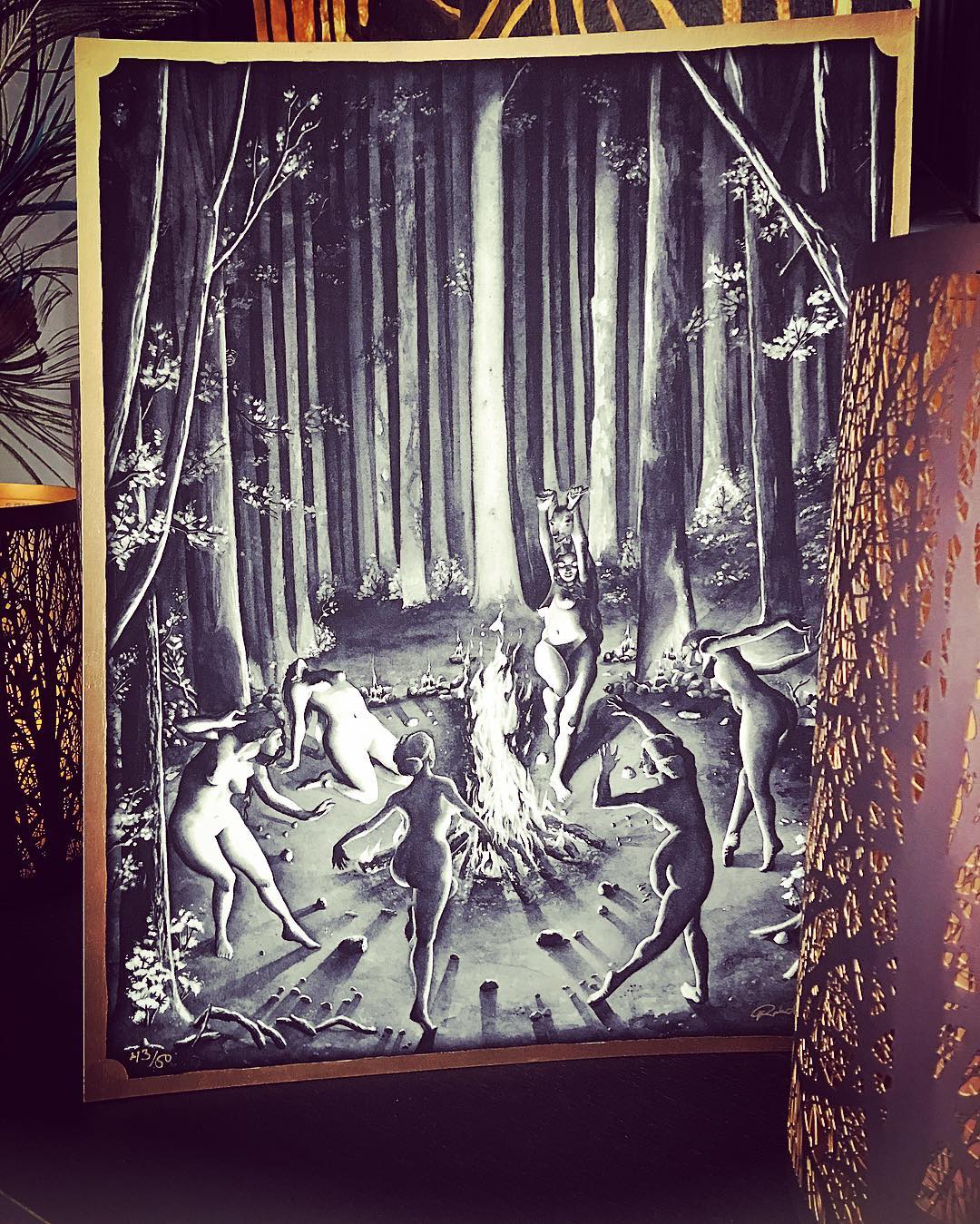 My art gallery is ever expanding.  I could lie and tell you that I purchased these things as balm for my fractured soul after the above-mentioned incident, but the truth is that I ordered these things before that. I have long admired Carisa Swenson of Goblinfruit Studio’s works–her curious creatures and aberrant animals have been delighting me for years!  I decided it was the right time to provide a home for one of them, and so in the top photo we have Giles in his jaunty blue waistcoat keeping company with other various treasures

In the second photo is Alholomesse by Robert Kraiza. I consider myself a person of hushed passions, silent desires, but I’ll admit, gazing upon these wildly ecstatic women whips me into a bit of a maelstrom. I am so thrilled to have these witches dancing on my walls! Well, eventually. We all know how long it will take for this to happen. 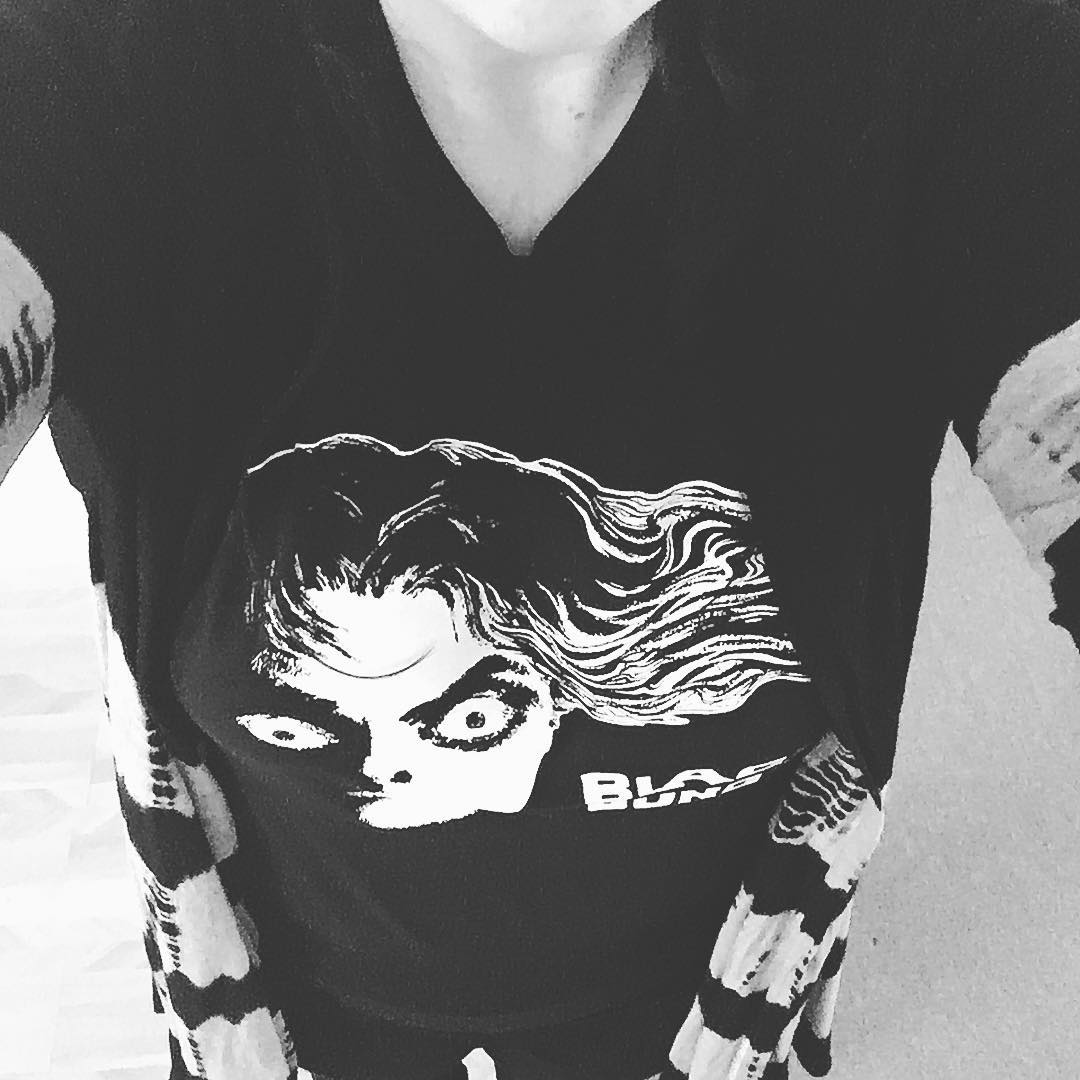 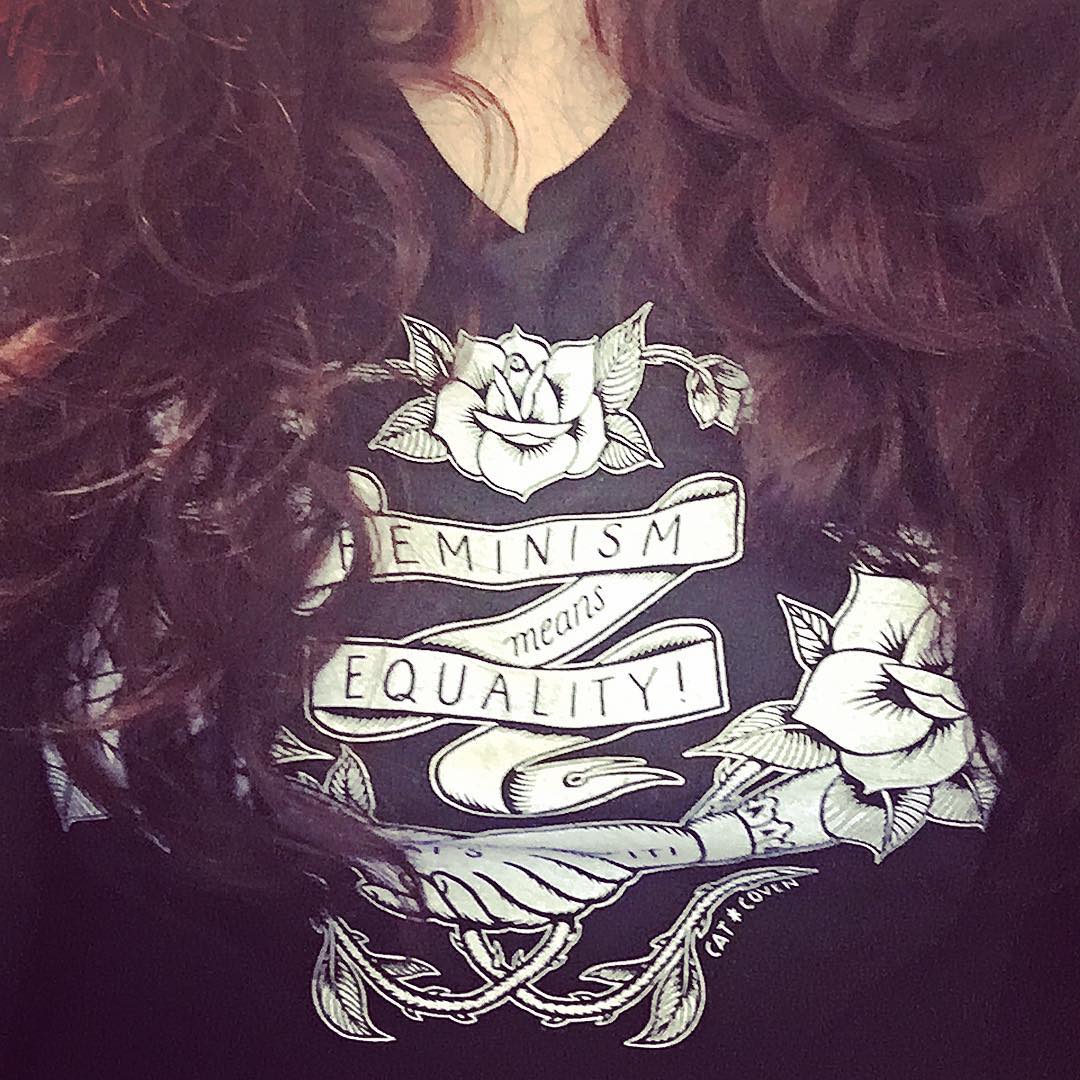 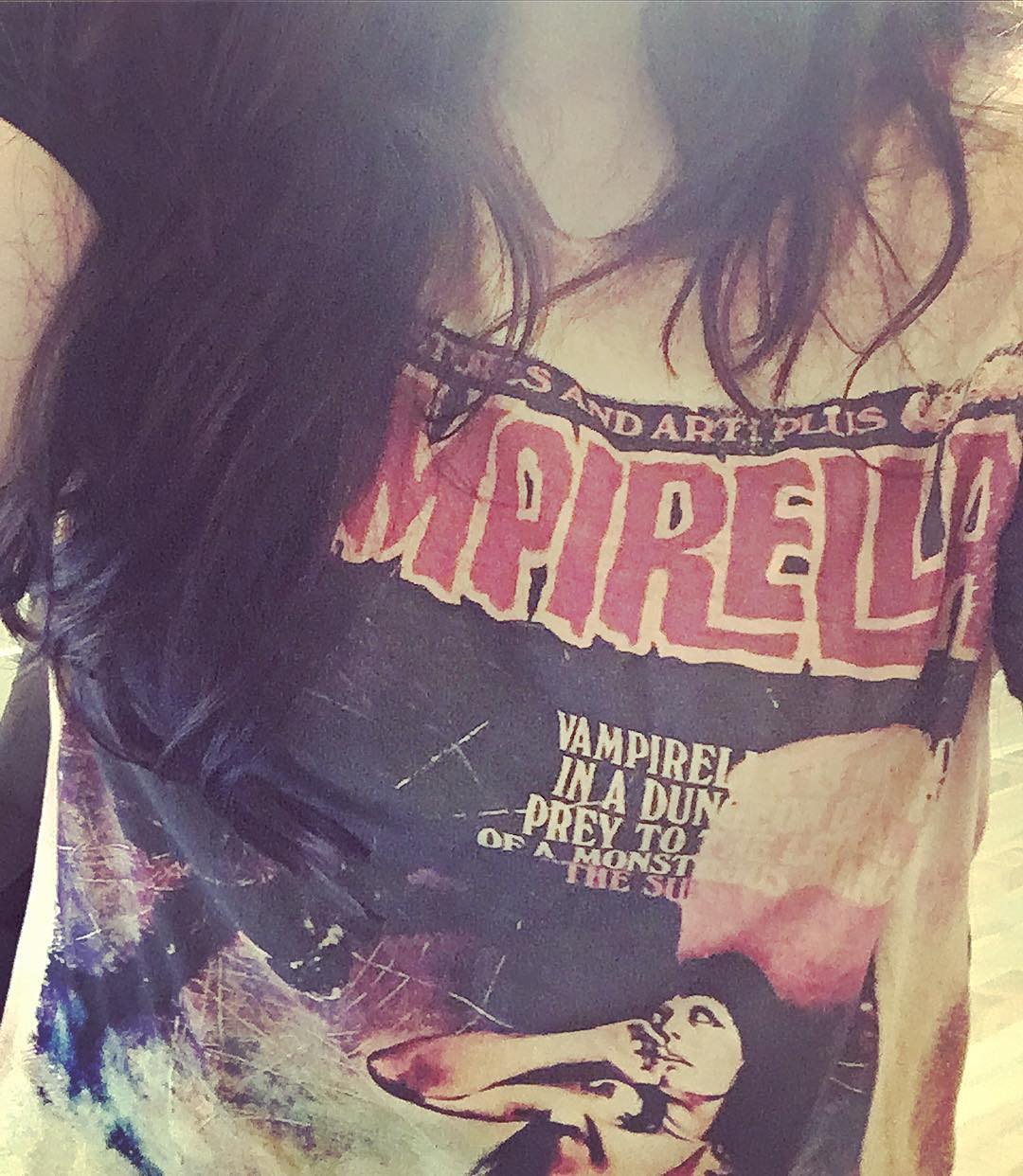 It’s summer wardrobe time!  And summer wardrobes, as we all know, consist of interesting, dark-themed tee shirts. Right?  Well, that’s what mine consist of, anyhow. Much….like the rest of the year, I guess. Hm. 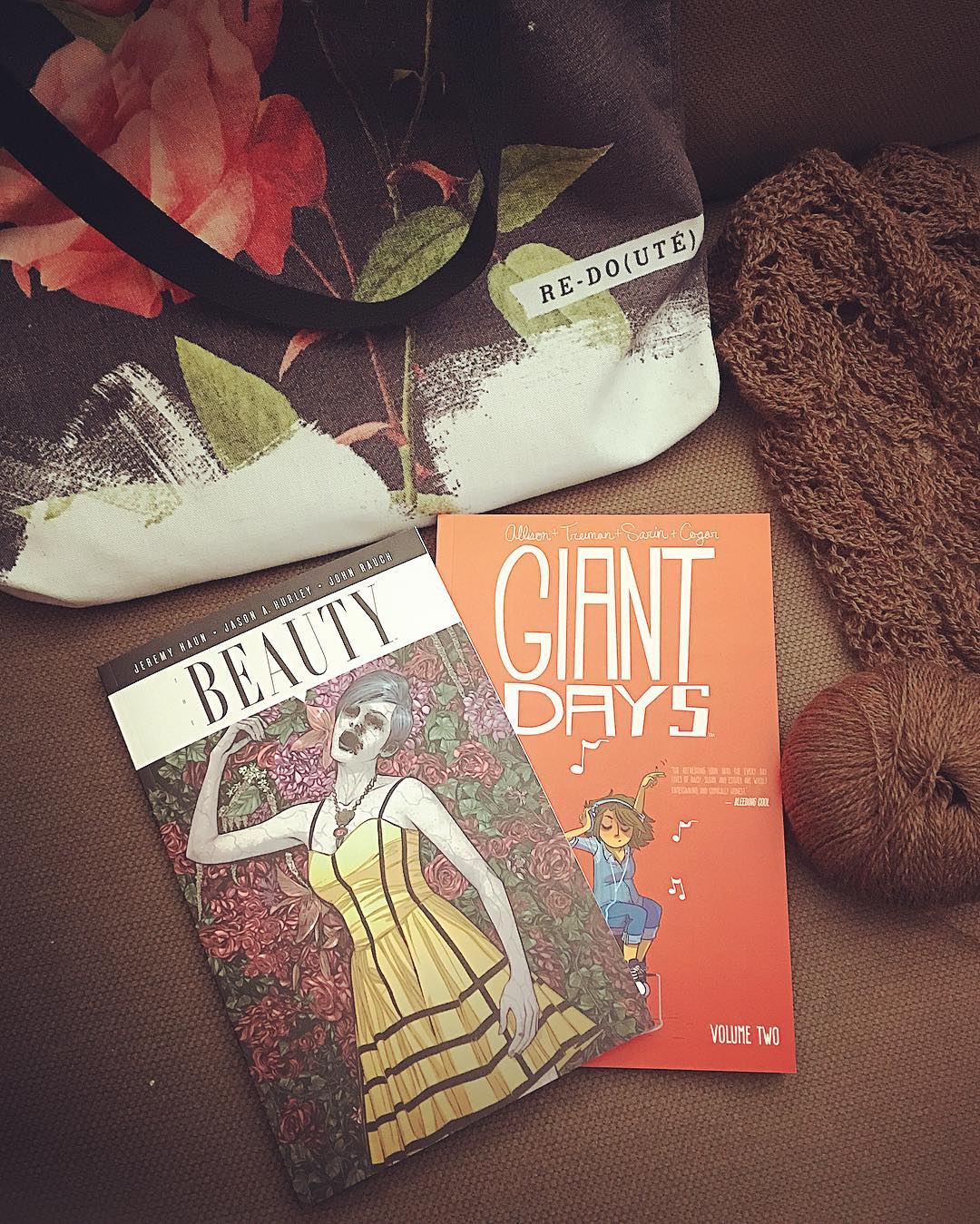 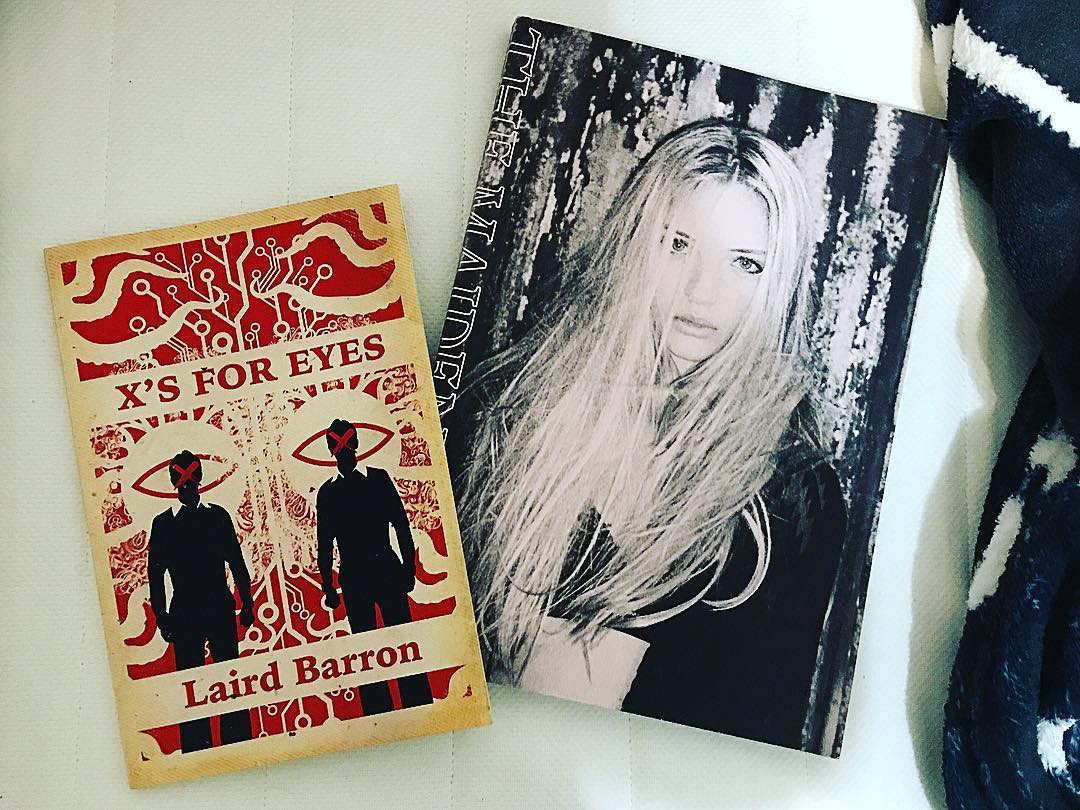 The very excellent Sabbat Magazine’s Maiden Issue, which is full of magics from some of my favorite artists, writers and visionaries. A++ 5 stars would be ensorcelled again.

X’s For Eyes by Laird Barron. This took a chapter or two to catch my attention, but I’m glad that I stuck with it, because X’s For Eyes is a lot of fun.  I am about two-thirds of the way through (it’s only about 100 pages or so) and it’s like…a pulp-cosmic-noir adventure with Hank and Dean Venture except less incompetent and more demented.

Giant Days Vol 2. I’ll just come out and say that I will always support anything John Allison has a hand in. His webcomic Bad Machinery (formerly Scary Go Round and Bobbins) is the only webcomic I still read…and it’s the one that I actually started reading many years ago that got me into webcomics in the first place.  I even got to interview him once! That was a total dream come true. And once he mentioned my polyvore stuff on his blog, or in the comments of his blog, as inspiration for some of his character’s fashions! Which…that makes me sound totally stalkery, so we’ll move on. Anyway, Giant Days is also a lot of fun, following Esther, Susan, and Daisy through weird, slice-of-life college life adventures.

The Beauty: I haven’t actually started this one yet, but doesn’t this sound intriguing? “Modern society is obsessed with outward beauty. What if there was a way to guarantee you could become more and more beautiful every day? What if it was a sexually transmitted disease? In the world of The Beauty, physical perfection is only one sexual encounter away.”

Listening to Mamiffer’s The World Unseen. I’ve loved this experimental duo since discovering them quite by accident back in 2010 or so. This new effort flickers with loss and light and is described as an “exploration of subconscious and psychic bonds between the past and present” and an “eight-song aural lexicon that vacillates between Arvo Pärt’s delicate minimalist beauty, Thomas Köner’s narcotic pulses of noise, and Richard Pinhas’ sublime textural patterns.”

Watching: The Fly and Angel Heart.  Can you believe I had never seen either one of those movies?  I enjoyed them both immensely.  That was obviously the role Jeff Goldblum was born to play and it was nice to see Mickey Rourke looking like a dream boat before his face became the unfortunate plate of wet cat food that it is now.  (Sorry, Mickey Rourke).

Doing: Saw a live taping of NPR’s Ask Me Another, attended a They Might Be Giant’s show, gardening, and knitting all of the things that gave me trouble last year.

What about you all?  What have you been up to lately? Seen anything fun? Reading anything interesting?  Had any near-death experiences?  Fill me in!