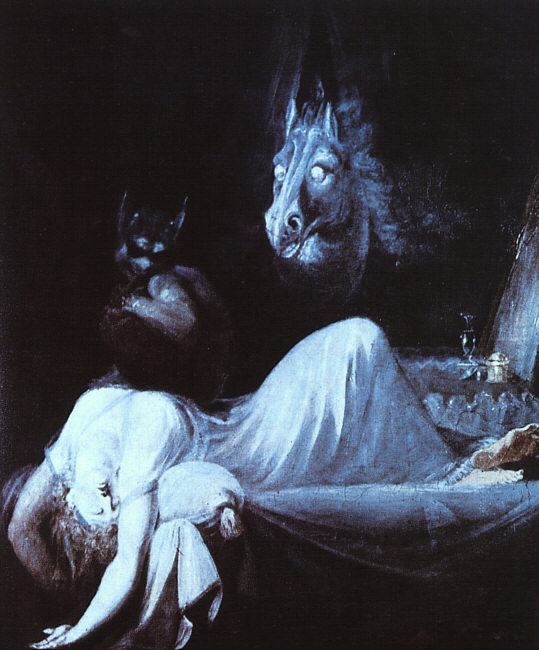 {This was originally written for After Dark In The Playing Fields,  in 2010.}

I struggle, but I am tied down by that dreadful feeling of helplessness that paralyzes us in our dreams. I want to cry out—but I can’t. I want to move——I can’t do it. I try, making terrible, strenuous efforts, gasping for breath, to turn on my side, to throw off this creature who is crushing me and choking me—but I can’t!

Then, suddenly, I wake up, panic-stricken, covered in sweat. I light a candle. I am alone. – Guy de Maupassant, Le Horla, 1887

When I was 11 years old, I shared a bedroom with my younger sister. We had a tiny, crowded room in a small ranch style house, on a quiet street in a little town on the east coast of Florida. Nothing much ever happened in our lives at that age – one day was very much like the day before and the one after that was not likely to be different.

In spite of our mundane existence, however, we were a very imaginative group of sisters; given to flights of fancy and outrageous story-telling, and if left to our own devices –which we often were – worked ourselves into quite a state in the absence of calming, more rational adult influences.

I do recall at that age I was enthralled with terribly lurid horror novels and more than likely regaled my sisters with gruesomely detailed synopses of the things I had read. We were also influenced by our mother’s gentleman friend who rented several horror films a week for us at the local video store, which we would gather round the television and watch, white knuckled and peeking over our pillows, late into the night during the summer months when there was no threat of school the next morning. I am sure that all of these things contributed to the particular evening’s events of which I am about to relay. Although this was not something I myself observed, I was party to the occurrence and to this day it perplexes me and causes me so small amount of unease.

The air conditioning was not working very well that summer; the ceiling fans did little more than stir the close, humid air of the hot bedroom, and we did not sleep with the windows open to let in a breeze from the outside. Our bedroom doors were always kept shut while we were sleeping, as well. Fire-prevention, my mother admonished, in the convincing-though-not-entirely-logical way that mothers do.

This night the room was stifling, though it was moonless and dark, and we eventually fell asleep. I am sure my sister and I talked about this, that, or the other thing before drifting off, as is the wont of two siblings very attached to one another. At that age, I was a very light sleeper; the slightest noise would stir me, and I was usually up and out of bed several times a night. I recall nothing unfamiliar of that night, no ominous, languid feeling stealing over me, if anything, it was heat-induced lethargy. I fell into a deep and dreamless sleep and did not wake again until it was light, my sister shaking me and crying piteously.

Even now, 20 years later, what she proceeded to impart to me chills the blood in my veins, and sends a shudder right through me “After I fell sleep” she said, “I had a bad dream which woke me up. I can’t remember what it was about. I tried to turn on the light, but I couldn’t move. I called your name over and over, but you wouldn’t wake up at all.”

She continued her tale, detailing how, as her eyes darted frantically around the room, she glanced at the door, which was standing wide open…despite the fact that this night, like every other, we had closed it tightly. In the darkened doorway she saw the shadowy outline of someone –- or something -– looming, standing stock still. As her gaze traveled upward, her terror reached a fever pitch when she saw that the intruder’s eyes -– a baleful, glowering red -– were fixed directly upon her own. At this point the story end, more or less. She cannot remember anything after that, and must have fallen back asleep.

Was she dreaming the entire time? Or was it perhaps a form of sleep paralysis with accompanying hallucinations? Or…was something sinister indeed lurking in the threshold of our childhood bedroom? 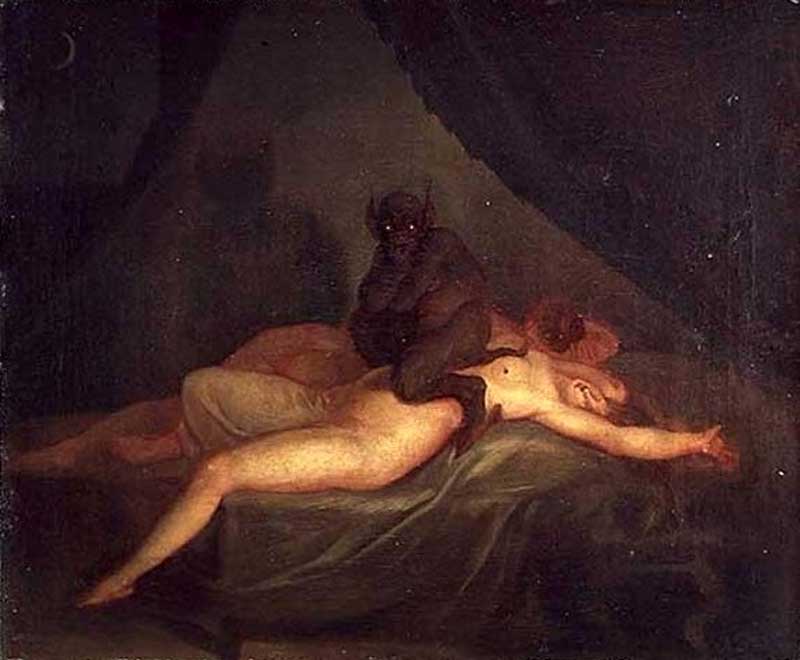 I’ve given this quite a bit of thought since then and I’ve come to the belief that she suffered an episode of sleep paralysis – a “brief state of being unable to move ones body upon either falling asleep or waking up,” and is “usually accompanied by an ominous feeling that there is some kind of ghost or demon in the room, or even visual or auditory hallucinations.”

Research indicates that sleep paralysis is a natural state of the body. In deeper states of sleep, the brain stems engage in processes that block out certain neurotransmitters in order to stop one from physically acting out their dreams. Occasionally an individual will wake up “before their brains have completely de-activated the induced paralysis, and experience hallucinations which are thought to be either vestigial dream fragments or attempts by the brain to reconcile the waking state with the otherwise unexplainable muscular paralysis.” This hallucinatory element makes it even more likely that someone will interpret the experience as a dream, since completely fanciful or dream-like objects may appear in the room alongside one’s normal vision. Some scientists have proposed this condition as an explanation for alien abductions and ghostly encounters.

J. Allan Cheyne of the University of Waterloo speaks thusly regarding initial studies on the phenomena and how we view it today “In 1876… an American Civil War surgeon, neurologist, and writer of historical fiction, Silas Weir Mitchell reported a curious malady, which he called –night palsy, during which soldiers reported a temporary but terrifying nocturnal paralysis. Although the phenomenon was subsequently reported in the medical literature under a number of different labels, the term coined in 1928 by Samuel Wilson, ―sleep paralysis, finally stuck.” It is worth noting that this was right around the same time Guy de Maupassant wrote Le Horla (see opening quote, above).

Nightmares and sleep paralysis, or nocturnal attacks have been closely connected to myths and monsters spanning across time and cultures, language and geography. Anecdotal reporting, shared stories, etc. shows how incidents of sleep paralysis seem to manifest itself in culturally-relevant terms and mythologies; whereas today we might attribute these occurrences to aliens or alien abduction, our grandparents might have seen ghosts, and their ancestors might have chalked it up to a demon attack or a witches hexing.

Cultures around the world have their own myths and folklore surrounding this phenomena. In Newfoundland & South Carolina, when one experiences waking with a feeling of terror and being crushed, and is unable to move, one is referred to as being “hag-ridden”. (The ‘Old Hag’ was a nightmare spirit in British and also Anglophone North American folklore.) In Chinese culture, sleep paralysis is widely known as “鬼壓身/鬼压身”, or “ghost pressing on body. In Vietnamese culture, sleep paralysis is referred to as “ma đè”, meaning “held down by a ghost” or “bóng đè”, meaning “held down by a shadow”. In African culture, isolated sleep paralysis is commonly referred to as “the witch riding your back”. In Malta, folk culture attributes a sleep paralysis incident to an entity in Maltese folk culture that haunts the individual in ways similar to a poltergeist. As believed in folk culture, to rid oneself of this one must place a piece of silverware or a knife under the pillow prior to sleep. (more examples of sleep paralysis across the world can be found via Wikipedia)

An interesting bit of information provided by J. Allan Cheyne through his research is that “first episodes of sleep paralysis typically occur to adolescents”; my sister would have been right around that age, maybe a year shy, when this occurred. But although his data indicates that many people have more than one episode – some report several times in a lifetime or several times a year, one large group reports monthly attack, but weekly or nightly attacks are rare – as far as I know, this never happened to my sister again.

That morning, as I listened to her tale and attempted to assuage her fears, I remember being terrified, myself. Whether or not it was real, I thought, it was awfully real to her, and if something like that could happen to her, well, couldn’t it happen to me too? Whether deeply slumbering and caught in the depths of a powerful nightmare, or trapped, immobile, by your own body and helpless against the tricks your own head is playing on you –- either way the shadowy intruder, or the ghost, or the alien is something conjured from the darker corners of your subconscious…and how can you possibly hope to escape that?