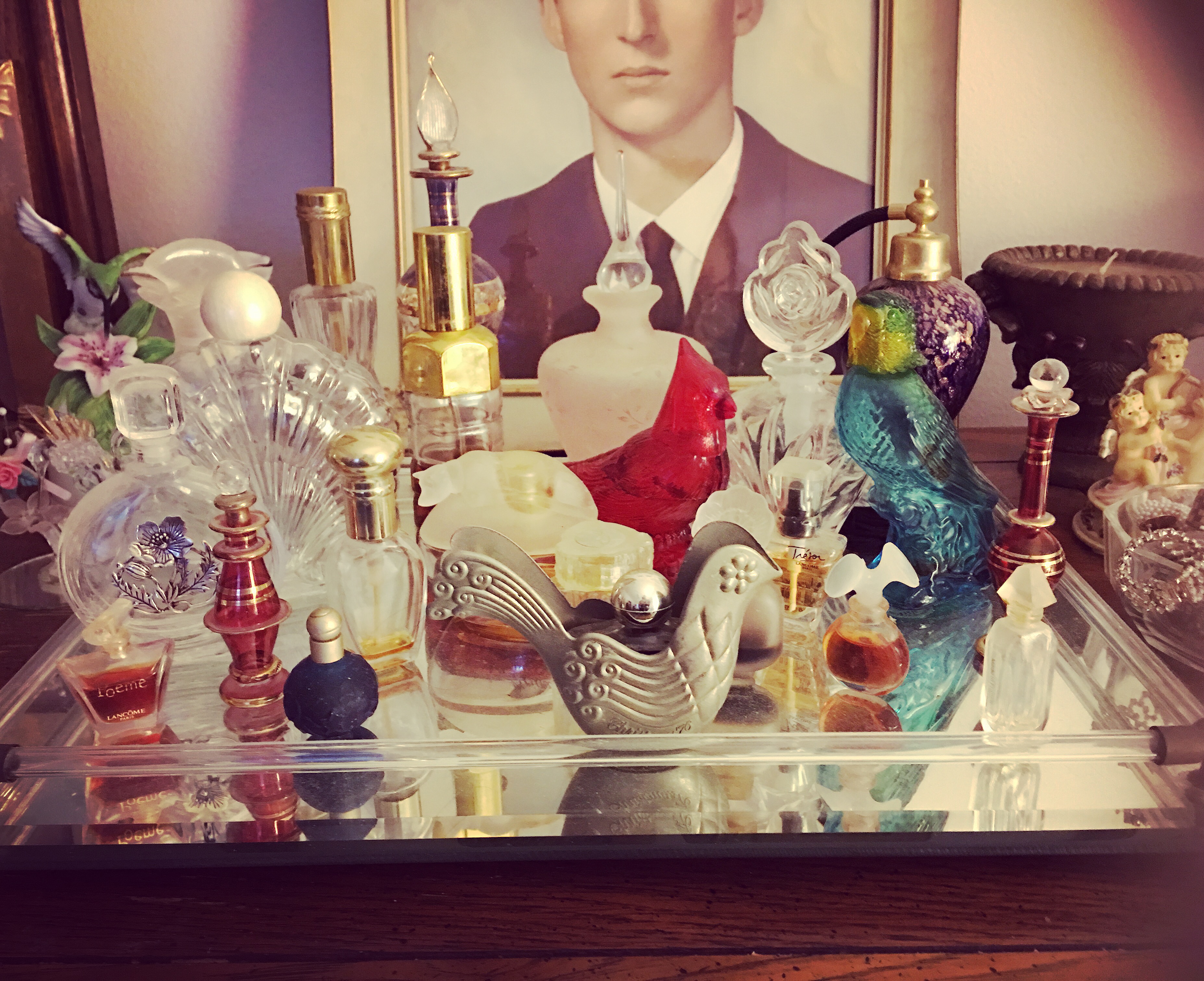 I have often spoken of my mother’s love of perfume, but I suppose I never considered where that might have stemmed from. A peek at her mother’s–my grandmother’s–perfume tray reveals a shimmering collection full of both beautiful bottles and a small number of beloved scents, and I think this is an interesting glimpse of the woman herself. A lover of birds and cut glass and loyal in her lifetime to a scant handful of fragrances, her influence has clearly inspired several generations.

My great-grandmother wasn’t the type (that we know of) to go in for the vanities of this world. She was, to quote my youngest sister, into “rhubarb pie and good bread and Baptist churches.” I imagine her only daughter though, one girl among seven brothers and after spending so much time among so many males, probably developed a fondness for whatever frivolities were available to her. A love which would grow, slowly, and steadily and sensibly over time.

It must be said that, that although this love of fine things was passed down through my grandmother to both my mother and I…well, the good sense–not so much.

Towards the back of that mirrored tray is a bottle of Youth Dew by Estée Lauder.  I have no idea how old it is, or when my grandmother last wore it, but my guess is that it’s been around for a great, long while, sadly unused.

Youth Dew is a scent from childhood visits to my grandparent’s home in Ohio, when I was very young.  I would spend the whole weekend there, watching Dallas and Hee Haw with my grandfather, or helping my grandmother make a pot of chicken and dumplings…there must have been a lot of reading and walks in the woods and no small amount of undignified begging of the grandparents to take me to the toy store for something new.

Usually, at least once per visit, I would convince my grandmother to allow me to rifle through her jewelry box. This was a small but crucial ritual for me at that young age– I’d usually threaten that I wouldn’t be able to fall asleep without it! Permission granted, I would then begin the process of removing the sparkling brooches and dangling earrings and line them up one by one, pretending that I was a fancy grown up lady, and I had my choice among baubles for a ball. The truth was, I probably would have worn all of them at once, to bed, if I could have gotten away with it.

The scent of that box of jewels, a sort of musty, metallic tang, is entangled in my memories of Youth Dew. The fragrance was, as I recall, a strange witches brew of heady, formidable glamour and unexpected comfort. It’s been over 30 years since I’ve smelled it (I couldn’t even bring myself to uncap it and sniff the sprayer this past weekend, when I took the photograph featured above) and so my memory may be playing tricks on me. The comfort might have been from the bosomy grandma-hugs, and not the perfume at all, but I couldn’t tell the difference then, and I suspect I can’t today, either.

Youth Dew is described as a heavily spiced oriental, and apparently everyone’s grandmother wore it–to the extent that I think it’s often described as a “grandma/old lady scent”.  I personally hate that phrase, for what it’s worth, but I also do not think there’s really anything “youthful” about the scent.  With notes including bergamot, peach, aldehydes, clove, rose, ylang-ylang, frankincense, amber,  tolu, benzoin, oakmoss, and vetiver (and many more, I left a lot out), its aura has always seemed to me one of aggressive grandeur and luxury, the kind that takes a certain maturity to pull off.

Recently, in conversations with a fellow fragrance enthusiast, I was bemoaning my lack of knowledge regarding the technical language in describing perfumes. Most of the time I couldn’t tell you if something smells indolic or lactonic or if it is a soliflore or if it’s the original or reformulated. But you know, my brain doesn’t really break things down like that. Sure, I guess it would behoove me to educate myself more fully on notes and their nuances and learn how to recognize those facets of a scent, but I’m pretty sure I’d continue to process them and talk about them as I always have.

So while I can tell you that it’s a sticky, darkly balsamic scent, a warm resinous amber, and a bit of powdery vanilin at the dry down, what I really mean to say is that it smells like a velvet backed, diamond choker. Or, basically, like this: 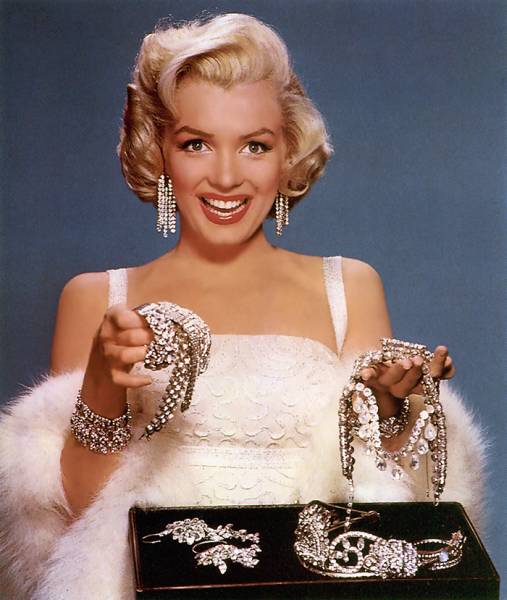 I can’t say for certain that’s what my grandmother was going for, but 30 years later my own love for baubles and jewels has not lessened one bit, so maybe I do need to spritz myself liberally next time I visit. I sincerely doubt I will ever have any such riches or glittering trinkets in my own jewel box and the imagery summoned by a luxe waft of Youth Dew is as close as I am likely to get.

3 Comments on A Year In Fragrance {Youth Dew}