Back in 2012, my fella and I visited Portland, OR and had a lovely time -delicious foods were devoured, delightful cocktails were quaffed, old friends met for the first time. It was a marvelous trip and we have been talking about it ever since.

It only made sense then, to make a return visit -this time with several friends in tow! And since I have a dreadful habit of glossing over the human aspects of my adventures, let me say that I could not hope for finer traveling companions. Everyone’s personality is so different in our group – boisterous and exuberant; clever and droll; taciturn and brilliantly observant -but they all add up to the most wonderful circle of friends! And it feels strange to say that, “friends”. These gentlemen were originally comrades of my beau* but over time, as I’ve gotten to know them, I feel like they might actually be friends of mine, as well.

*(I don’t mean to sound pretentious, but I hate the term “boyfriend”, so I’ll use just about every other descriptor I can wrangle.) 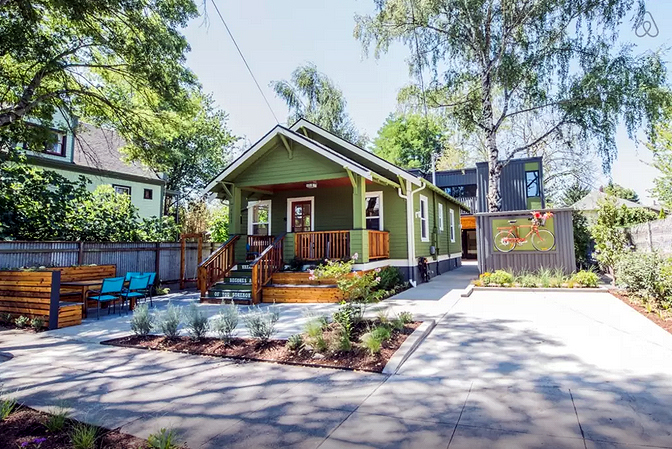 We found a fantastic place to stay via Air BnB, a spacious and welcoming spot to call home base whilst exploring the city. A renovated 1920’s bungalow, it offered four bedrooms and two bathrooms, a large kitchen, and plenty of community space for boardgames and D&D and Dark Adventure Radio Theatre (we’re a nerdy group, you know). Again, we stayed in the Mississippi neighborhood and reveled in the chance to revisit some previous loves while staking out some new favorites with my fellow travelers.

If you’ve a hankering to visit the City of Roses, perhaps you will consider the following suggestions? Portland friends, commence the eye-rolling now.

At Mac! you’ll find all sorts of macaroni and cheese related shenanigans.  We shared enormous plates of their Truffle Mac, Cheeseburger Mac, Artichoke & Spinach Mac, and Cordon Bleu Mac. Somehow we lived through it.

We had a few breakfasts at Sweedeedee, a small corner cafe which is an excellent place for people watching and listening to records and eating pie – if you get there early enough, before the place starts to fill up. Recommended: the egg sandwich with shredded lettuce and avocado on the most delicious thick-cut, molasses bread. Also, salted honey pie. Skip: the breakfast burrito (too much mealy, undercooked potato). 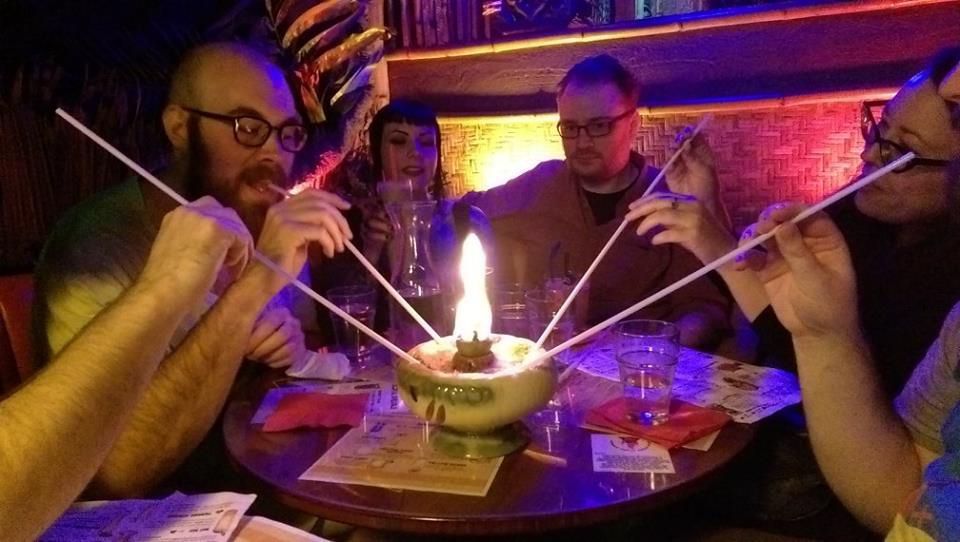 At Hale Pele, in the lurid glow of torchlight and under the baleful glare of the gods, we sacrificed our dignity with friends and fellow fire drinkers.  I am fairly certain I had just about one of everything on the menu, and I will admit, near the end I am not even sure what I ordered.  I have to recommend, however, the Corn ‘n’ Oil, which as the menu would suggest, is indeed a strange name for an amazing drink. If you are looking for a nosh, they have several things to munch on; my favorites were the fried taro chips and the tuna poke. I love tiki bars for their kitschy escapism and potent cocktails, and Hale Pele now sits at the top of my list.

Elsewhere in the city, I met these two magical humans for art and cocktails; at Antler Gallery for the Unnatural Histories show – where I finally got to see one of Jessica Joslin’s exquisitely crafted bone and brass menagerie in person – and at Victoria Bar, where the drinks were Princess Bride inspired! 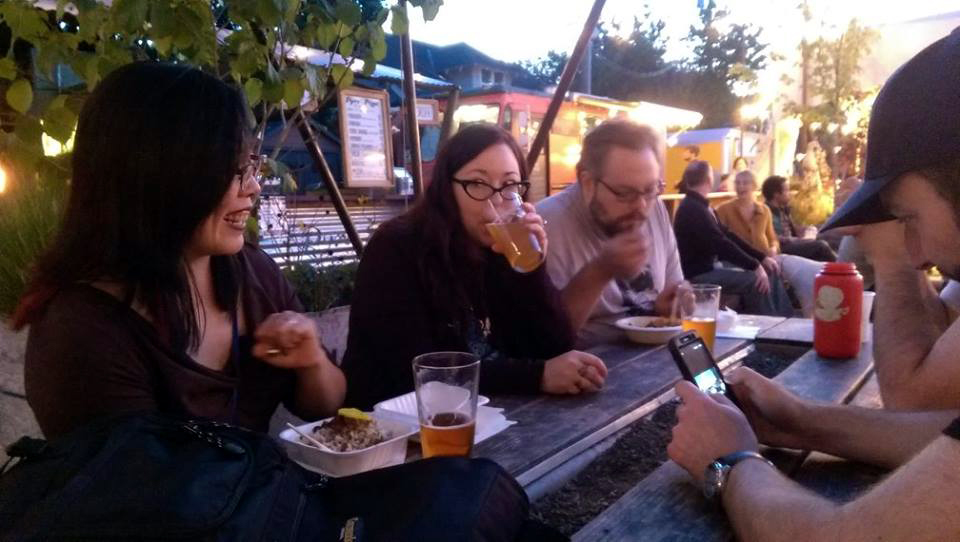 Normally I am not keen on photos that other people take of me, because I have only like, 1/8 of a good side and no one knows how to capture it properly. That’s not their fault, of course.  I just don’t photograph well.  I shudder to think that I might actually look like a poor photo all of the time… but I suppose that’s a possibility that I can’t rule out, no matter how much it bruises the ego.  I do love this picture, however, taken at Tidbit Food and Farm food truck pod thingy whatever you call it. I don’t recall what we were discussing, but the look on my face is ridiculous and I love Minna for meeting up with us to visit, and for making me make that face.  I also do not recall what was eaten, but there was rice and noodles and karaage and takoyaki and I felt like the heroine of an action packed food anime trying to stuff it all in. Afterward, Minna marched us over to Fifty Licks for boozy adult ice cream super fun times. Pictured above is the Velvet Shiso made with plum wine, Riesling, and their Coconut Lemon Saffron sorbet with is spiced with saffron, star anise, and cardamom. It was amazing as it sounds. The only thing missing from this wonderful evening was our good friend Robyne, who was nursing a cold. Hopefully we will see you in January, Robyne!

The Lan Su Chinese Garden is a beautiful spot to gaze quietly upon art, architecture, design and nature, and I was just enamored this time around by the mosaic courtyards with their poetic names – “Plum Blossom On Cracked Ice” being the best-loved by my ear and my favorite to speak aloud.  I have heard that the guides sometimes suggest walking barefoot on the stones to feel the different patterns  and such, and I think that sounds like a lovely idea and a pleasant exercise in mindfulness (…or something?  At least it sounds like a nice massage for the feet!)

Also, if you ever wonder if I actually wear the things that I have purchased from Stitch Fix, I present to you Exhibit A: the Everly Peter dress from Fix #10. I wore it with leggings and an asymmetric black Helmut Lang jacket and it was super cute. This photo, by the way, was taken in a startlingly clean nerdy game shop bathroom.

Next up: roses! more cocktails! doughnuts All of the shopping!

3 Comments on Our favorite city: Portland (part one)