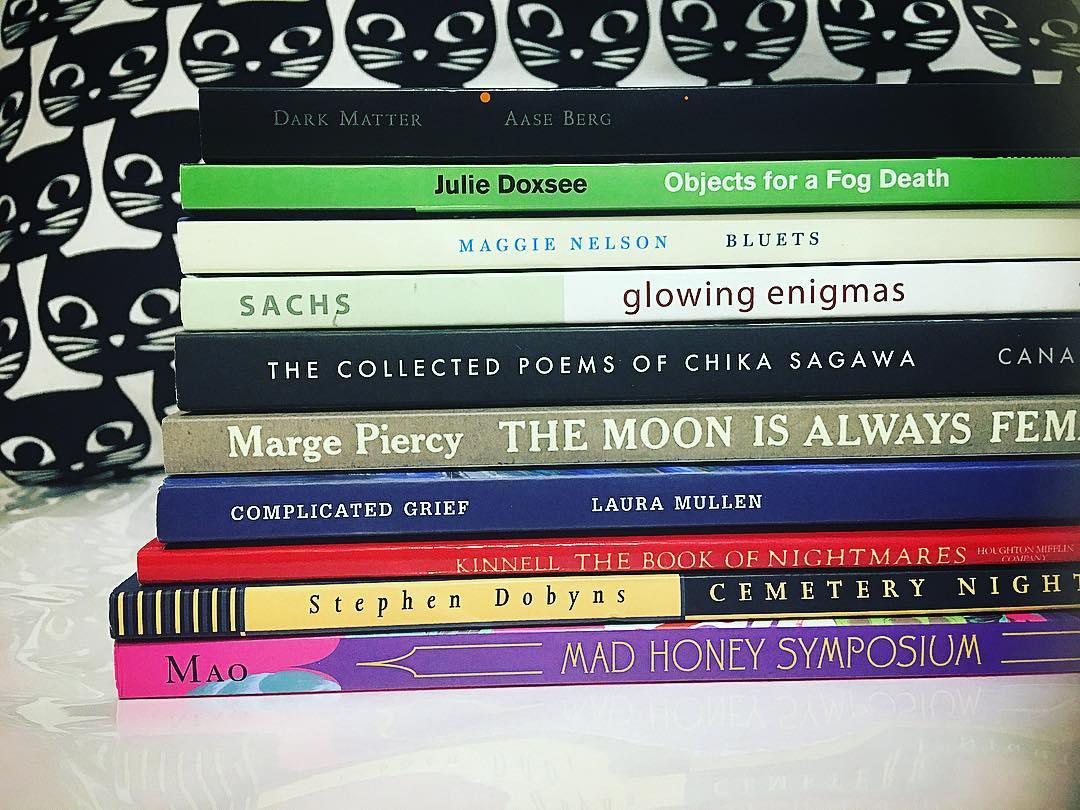 Behold the stack of poetry that I have been working through for over a year now! Some of them are more recent acquisitions, some recommendations from friends, a few were purchased on a whim and tucked away for another time. Perhaps to forget about, and then stumble upon sometime in the future, on a rainy afternoon. Or a sunny afternoon during which I will dim the lights and draw the shades and pretend like the intermittent cycles of the dishwasher are the onslaught of a summer sudden storm.

In truth, so far I have only read two of these volumes of poetry: The Moon is Always Female by Marge Piercy  and Bluets by Maggie Nelson (though I just started the Chika Sagawa book yesterday…it is elusive and fascinating, and will no doubt bear multiple reads.)

The Moon Is Always Female is perhaps best left for another time; months later I am still digesting the potent, revelatory lessons I squirreled away whilst reading it. Piercy, in a voice earthy and strong and brimming with joyful humor, writes of longings, warnings, and dreams–and with a sense of absolute, empowering conviction that made me want to rejoice in laughter and song, scream in triumph. Someone on the internet commented that they thought this collection seemed “dated” (it was published in 1980) and I must disagree with every fiber of my being. It’s an intensely energizing read that I foresee engaging and inspiring women 50 years from now. 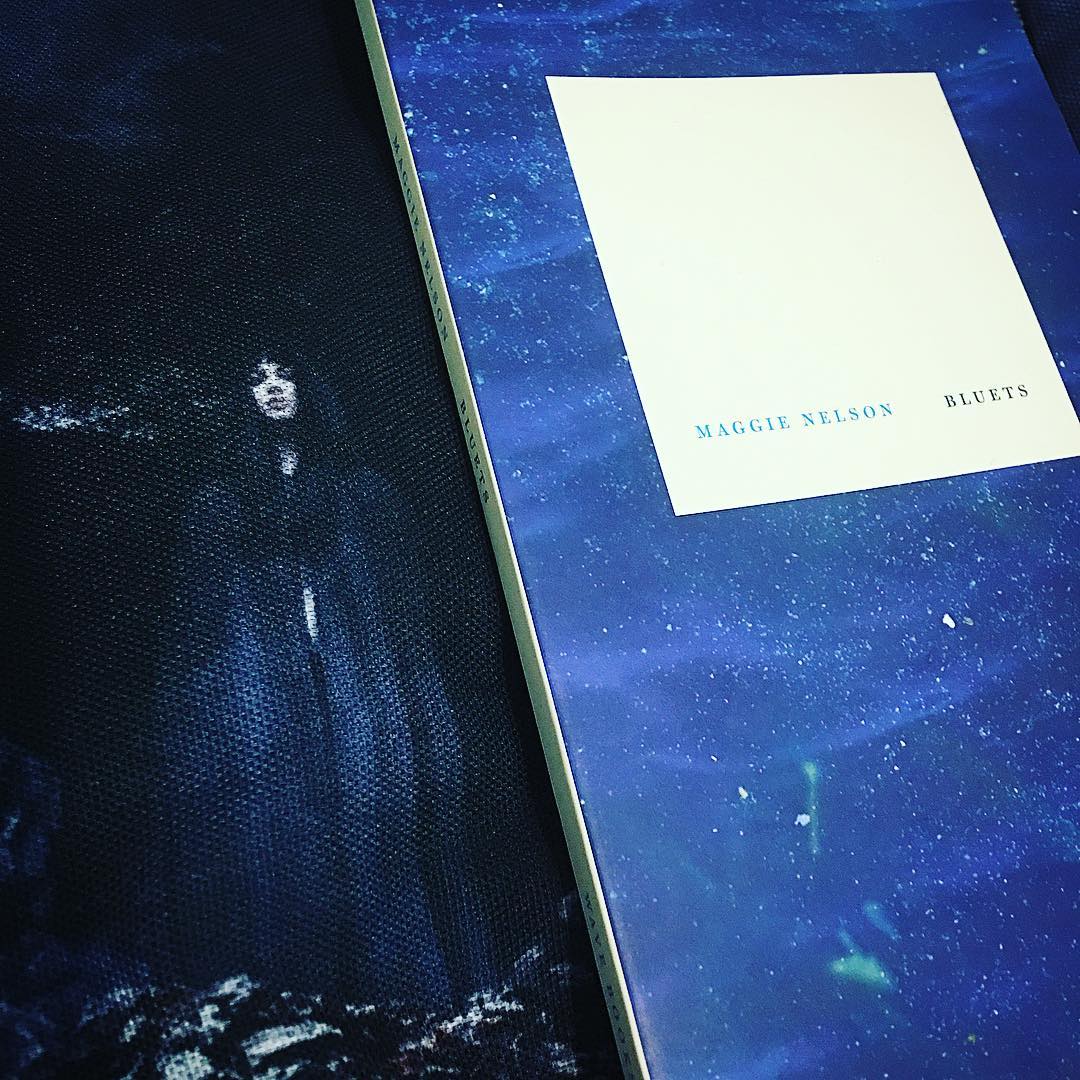 Much like my favorite volume of poetry last year, Bluets was initially suggested to me by Pam Grossman, and I am so grateful that she shared the recommendation with me.
I am, however,  sad to say that in thumbing through Bluets now I am disappointed to see that I did not mark pages or underline passages; nothing to indicate that there was something that struck me as profound or which gave me pause for reflection that I’d like to revisit and re-read. Though I know marking up books in such a way is frowned upon by some people, I personally have no problem with it. They’re my books aren’t they? I’ll underline and asterisk and highlight as I please!  I personally find pristine books highly suspect. Regardless, my unblemished copy of Bluets remains a rare treat. Perhaps the lack of scribbled notes and underlined text is because there was so much in it to love and I could not isolate and elevate any particular passage over the others.

It is written as a series of small vignettes–numbered lists, really–exploring reflections upon the color blue and the connections that Nelson draws between those collected observations and her own experiences.

“1. Suppose I were to tell you that I had fallen in love with a color”, she begins.

From a reader’s perspective, it presents as a collector’s secret diary of sorts, whose pages offer glimpses of morbid heartbreak, pervasive loneliness, pain both artistic and physical, ecstatic grief, and deep sadness, as well as compassion, beauty, and fleeting joy. These confessions are collaged together with all manner of scraps and detritus relating to every blue in the spectrum, consulting numerous writers, artists and thinkers along the way.

156. Why is the sky blue? -A fair enough question, and one I have learned the answer to several times. Yet every time I try to explain it to someone or remember it to myself, it eludes me. Now I like to remember the question alone, as it reminds me that my mind is essentially a sieve, that I am mortal.

157. The part I do remember: that the blue of the sky depends on the darkness of empty space behind it. As one optics journal puts it, “The color of any planetary atmosphere viewed against the black of space and illuminated by a sunlike star will also be blue.” In which case blue is something of an ecstatic accident produced by void and fire.”

I read a review of Bluets wherein Nelson is accused of indulgent navel-gazing, and my response to that is: “…and? So?”.  That’s what poets do, isn’t it?  A poet, I think, is its own favorite subject, and that’s precisely as it should be. Evan J. Peterson writes “The poet is stereotyped as a different kind of pervert, one who enjoys the depths of his own navel and the taste of his own toes, and furthermore, one who wants everyone to know this about him.” Just so!

A handful of readers have noted that they are able to pick this book up and peruse these pages willy-nilly, in no particular order, but I think you are doing yourself a disservice to treat it like that sort of a read.  These writings have a flow, wherein one thought or recollection or recounting of facts leads into the next and though sometimes the connections between them are fragile, tenuous–they still exist. To skip around is to lose the link, and I believe that’s where precisely where the magic, the blue-tinged marrow is found. Not in the bittersweet experiences she shares, and not in the facets or features or characteristics of the color, but in how she links all of these things together.

239. But now you are talking as if love were a consolation. Simone Weil warned otherwise. “Love is not consolation,” she wrote. “It is light.”

240. All right then, let me try to rephrase. When I was alive, I aimed to be a student not of longing but of light.”