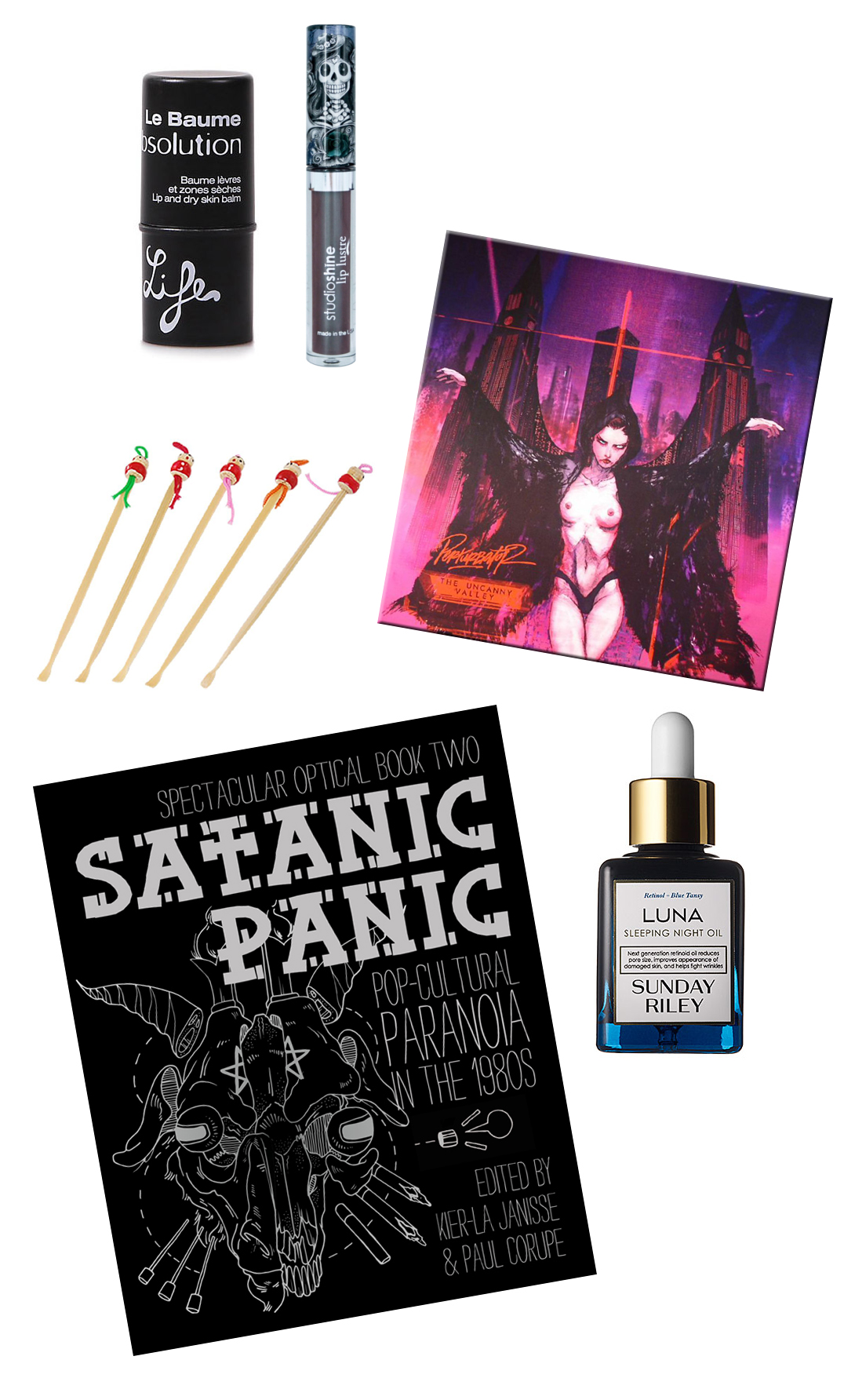 For a while now I’ve been wanting to do another Stinkers & Duds post but oddly enough, there’s really been nothing I’ve hated enough to include in a round-up of loathesome stuff.
I guess that’s a good thing?

Instead, here are a few things I have really been enjoying lately.

Le Baume Absolution has a concentrate of Marula, Perilla and Calendula in it and is absolutely fantastic, but whatever– I would love this lip balm for it’s chubby, stubby, easy-to-fit-in-the-hand shape, regardless. It is a wonderful formula, though–not too greasy or too heavy, and not mentholated (which is a huge NOPE for me.) This is, without a doubt, my favorite lip product ever.  I have already replaced it three times now.

L.A. Splash Studio Shine Lip Lustre in Catrina is a gorgeous deep brown base color with a strong metallic blue-green shift, or at least that’s how it is described, but on me, this is definitely less of the beetle-winged color and almost straight-up shimmery green-blue.  Also, you may never have to re-apply this stuff. It doesn’t fade, it doesn’t wear off. Hell, you can barely even get it off your face. (Hint: I use this stuff and a really scrubby washcloth).

Ear Scoops! Yes, yes, I know–we’re not supposed to be sticking anything in our ears. But there’s nothing quite so satisfying as cleaning the gloopy, glunky stuff out of our ears with a q-tip, after a shower, right? That’s what I thought, but then I read this and was immediately intrigued and had to stock up. I’ve already had one weird scare, but I’m an idiot and won’t let that stop me. I’m gonna stick things in my ears and there’s really nothing you can do about it.

The Uncanny Valley by Perturbator is both eerie and energizing and is full of aggressive retro-synth and jazzy noir and groovy bits and I yeah, everyone I know is over this 1980s sci fi/horror sound, but I can’t seem to get enough of it. It’s perfect writing music if you need some melodic noises in the background but you don’t want someone distracting you with a bunch of lyrics. *See also: thisquietarmy’s entire discography.  It’s different sound (ambient/drone/post-rock), but perfectly suited to this use.*

Sunday Riley Luna Oil is a product I have mentioned before, but it’s really just that good.  Advertised as a “next generation retinoid oil [that] reduces pore size, improves appearance of damaged skin, and helps fight wrinkles.”–it’s basically a nighttime vitamin A treatment oil.  It gets mixed reviews for the ingredients (here’s a list), the price, the blue tint, but I wake up with the most velvety skin after having applied it before bed. When I run out I would love to find a more cost-effective version of this stuff, but for now it is pretty amazing.

Satanic Panic has got Kier-La Janisse’s name attached to the project, so I already love it, but how does this sound? “In the 1980s, everywhere you turned there were warnings about a widespread evil conspiracy to indoctrinate the vulnerable through the media they consumed. This percolating cultural hysteria, now known as the “Satanic Panic,” was both illuminated and propagated through almost every pop culture pathway in the 1980s, from heavy metal music to Dungeons & Dragons role playing games, Christian comics, direct-to-VHS scare films, pulp paperbacks, Saturday morning cartoons and TV talk shows —and created its own fascinating cultural legacy of Satan-battling VHS tapes, music and literature. From con artists to pranksters and moralists to martyrs, Satanic Panic: Pop-Cultural Paranoia in the 1980s aims to capture the untold story of the how the Satanic Panic was fought on the pop culture frontlines and the serious consequences it had for many involved.”

I am only a few pages in, but I am already deeply engrossed.  The link above is a pre-order on Amazon; I got my copy directly through the publisher, but I think that version is sold out now.

Wow. I just realized there is no perfume on this list! I think it’s because I am testing a bunch of stuff right now and I’m not ready to talk about any of it yet, ha.
What’s got you excited lately? Books, musics, perfumes? Tell me all!