My little sister has done an admirable job with keeping a “plague diary” over the course of the last X number of days (yikes, has it really been that long?) I wish I had that same dedication and fortitude and the …motivation, I guess, to summon thoughts and what to say about them, but I guess I don’t. So much of this time right now feels exactly like the life I was leading up until this crisis, and it seems…profoundly uncool to talk about how much my life has not changed. Still working from home. Still a homebody. Still relieved when it comes to canceled plans. Still living in my own little world.

My fears and anxieties come not from concern for my own safety or worries about my continued financial stability (although quite frankly I am not sure how or why I am still employed) but rather…sympathy pains, I suppose you could say, for my friends and family and the rest of the world. I’ve internalized so much of the collective chaos and I am sad and stressed and scared; this article says it has something to do with “allotastic load” and this article says that the discomfort I am feeling is grief. From whichever perspective I look at it, man, I am drained. And I can’t even believe I am saying this…I have now officially spent too much time at home.

Last month I was to have visited (and met in person for the first time) a dear friend in the midwest; this past weekend I was supposed to meet up with my sisters to celebrate one of their birthdays; typically we visit Y’s parents every month or so, we go into Orlando for a weekend, we have a few dinners out during the week, and not to mention the absence of grocery shopping and hair appointments! But. Nobody’s going nowhere and there’s nothing to be done about it and that is all for the best.

As far as all of this time we supposedly have on our hands now. I’ve got the same amount of time as I’ve always got. It just feels different. It simultaneously feels like swimming in jelly or running in slow-motion as though in a dream, except there’s this dreadful urgency there, because, although I am still feeling foggy and slow and drained, I am expected to work my same 8:30-5:30 (or sometimes 6:00 or 6:30 every day.) I feel like I’m both in this liminal, holding pattern place–sort of like how it feels here, in FL, right before hurricane hits–and I am in real-life, where things are needed and expected of me, and it’s taking a superhuman effort be in both places at once.

I also should note I have been trying to write this blog post since the beginning of April. Ugh. Is there any point to finishing it and posting it now? I think there is. Even if it feels like life is at a standstill…it’s not. It’s not on pause. It’s still happening and unfolding every day, and I guess I’d like a record, of sorts. 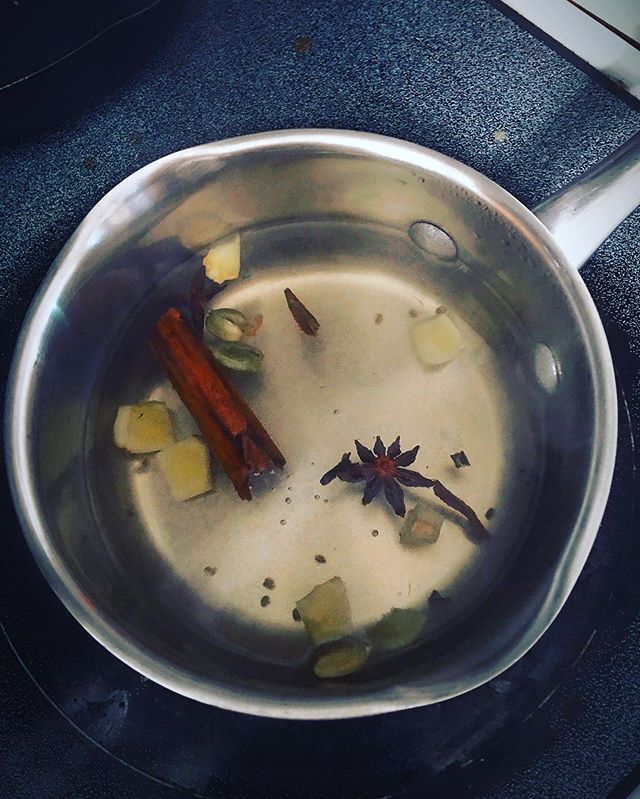 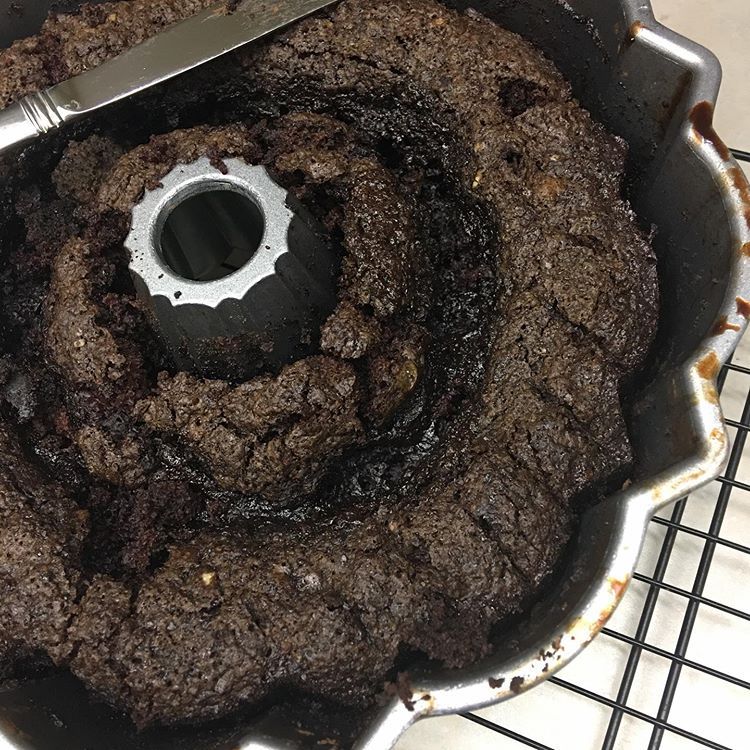 Instead of the travels I had planned, then, let me tell you about my culinary explorations. I made biscuits for the first time, ever! I made my first-ever chocolate cake from scratch (it looked horrible, but it was delicious–and I don’t even like cake!) I ground my own spices and made Masala chai; I made a vegan caesar salad dressing and vegan jerky; I made what I am calling a “savory fruit salad” in an attempt to salvage a few tomatoes and an avocado that were just past their prime.

Which is to say: combine diced and ripened tomato and avocado, a bright green funky flurry of chopped scallions, a nutty slick of sesame oil, a tangy dribble of rice wine vinegar, and several enthusiastic shakes of aromatic shiso furikake. It may look like a glunky pile of unpleasantness, but holy Japanese guacamole, was it incredible. 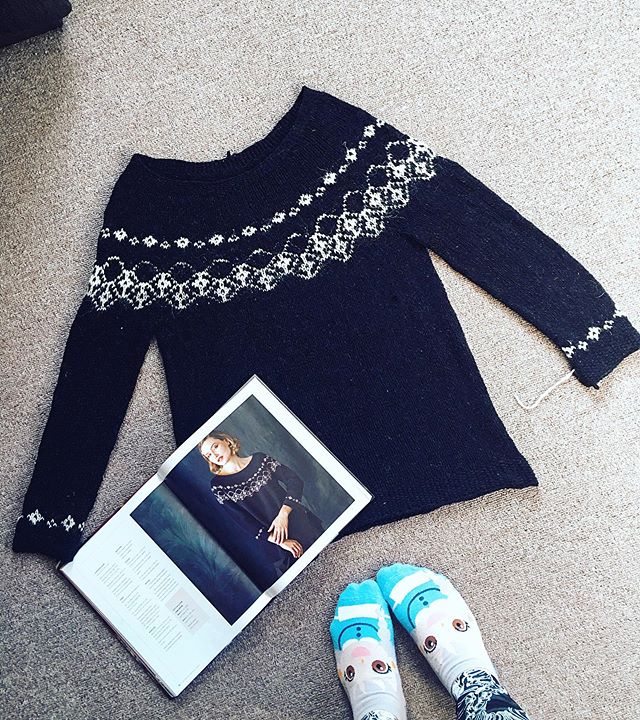 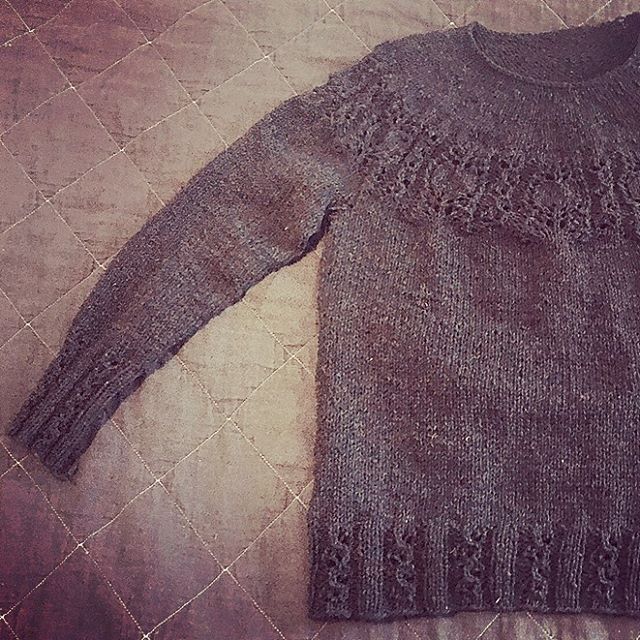 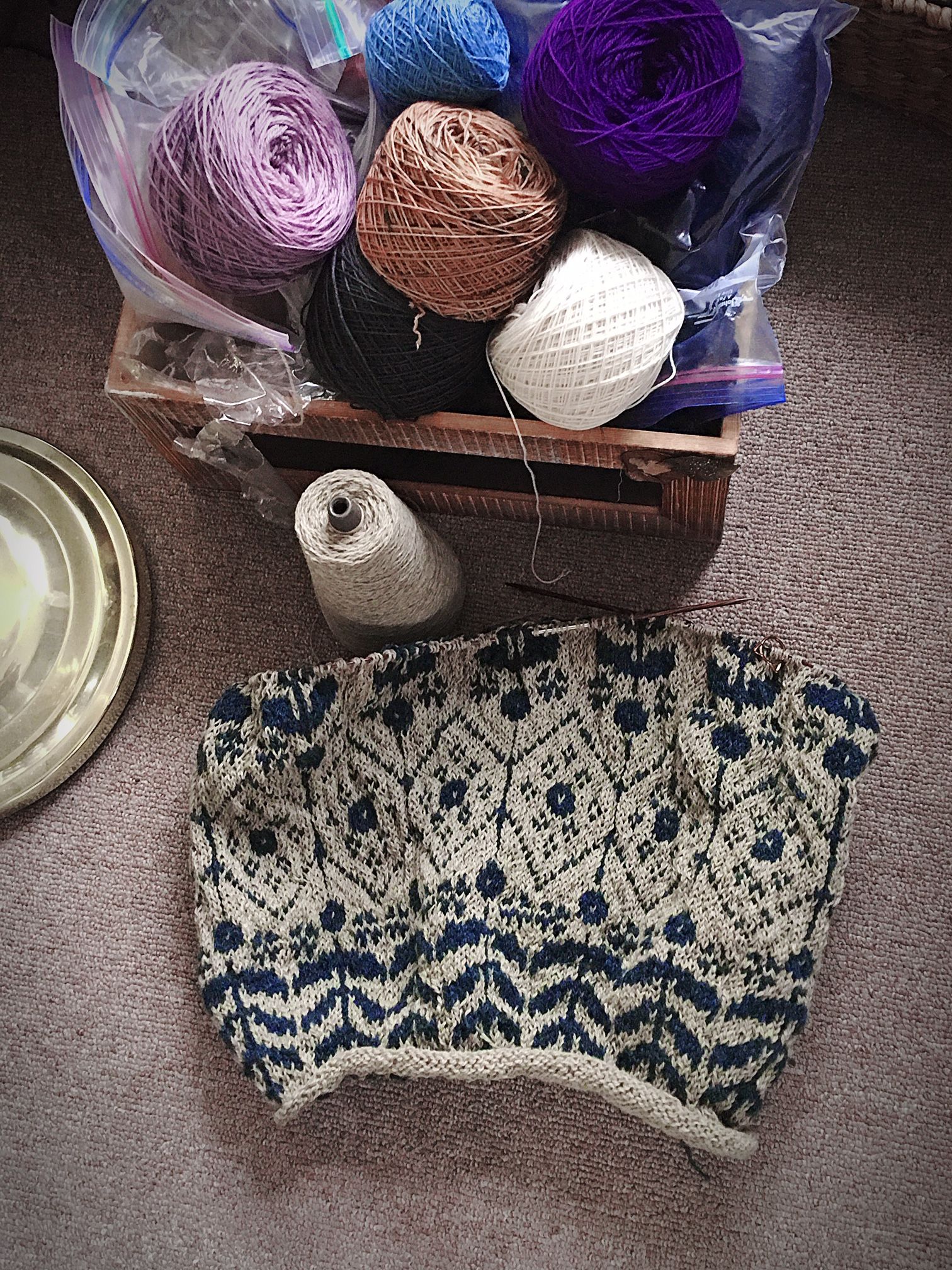 …and have I shared sweater journeys with you? I haven’t knit a sweater in years and years, and the reason for this is because they require more precise measurements than I care to deal with; socks and shawls don’t really have the same fit issues that sweaters do, so I’d prefer the fiddliness of tiny stitches and complicated lace to the prospect of a sweater that’s going to end up being the size of that tent that the Weasley family travels with for Quidditch matches.

However! I was gifted with a sweater pattern book for the holidays, and I thought “well, hey, now that I am living in the semi-tropical climate of Florida again, it sure seems like a great time to knit up some heavy woolen sweaters!” When the imp of the perverse calls to me, I must obey. And so I did.

And do you know what? Now that I’ve got another decade of knitting under my belt, these things actually fit!

From the top photo down is the Sashiko sweater by Mona Zillah, the Emerge sweater by Andrea Cull, and the work in progress at the very bottom is the Carlina pullover by Whitney Hayward. 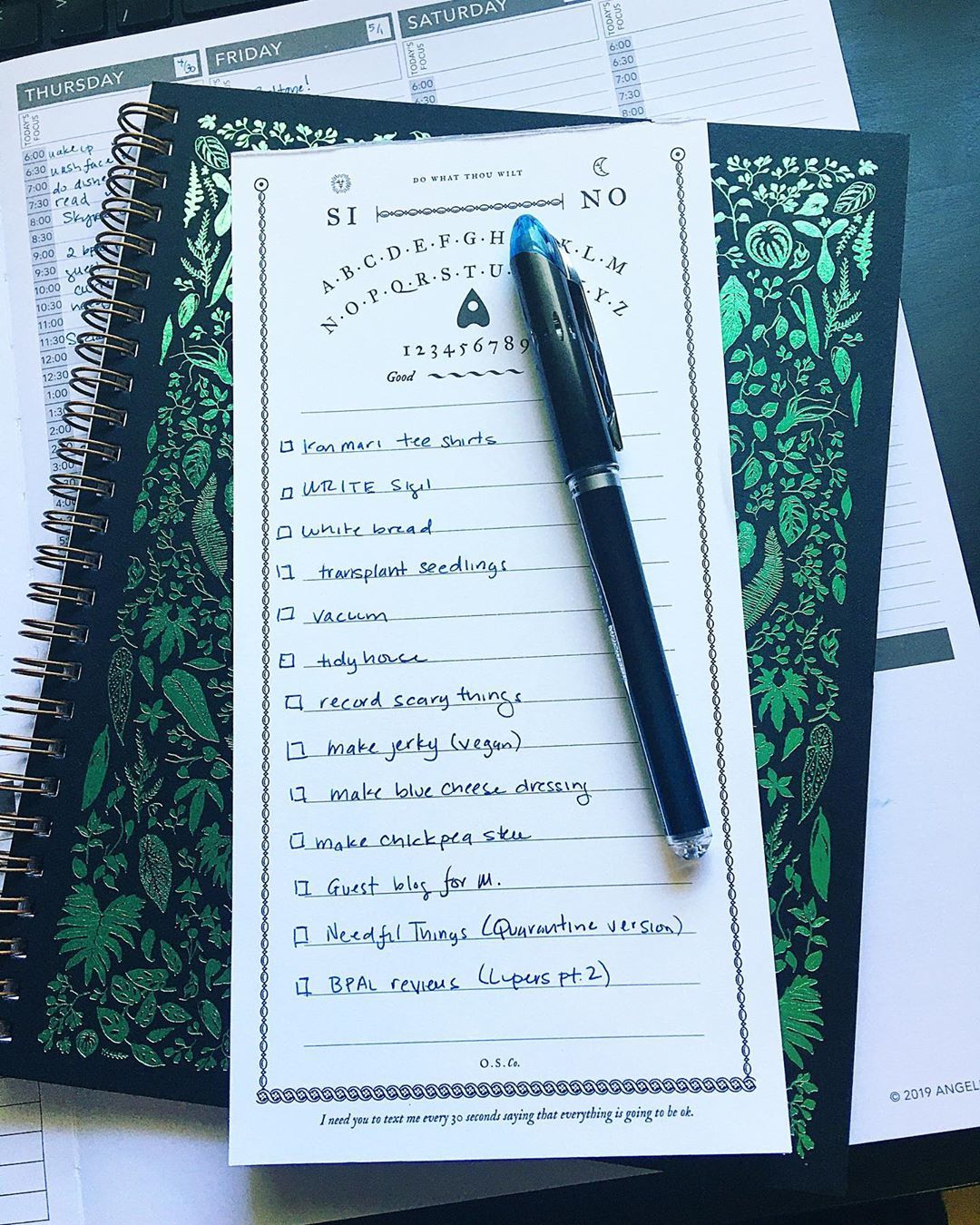 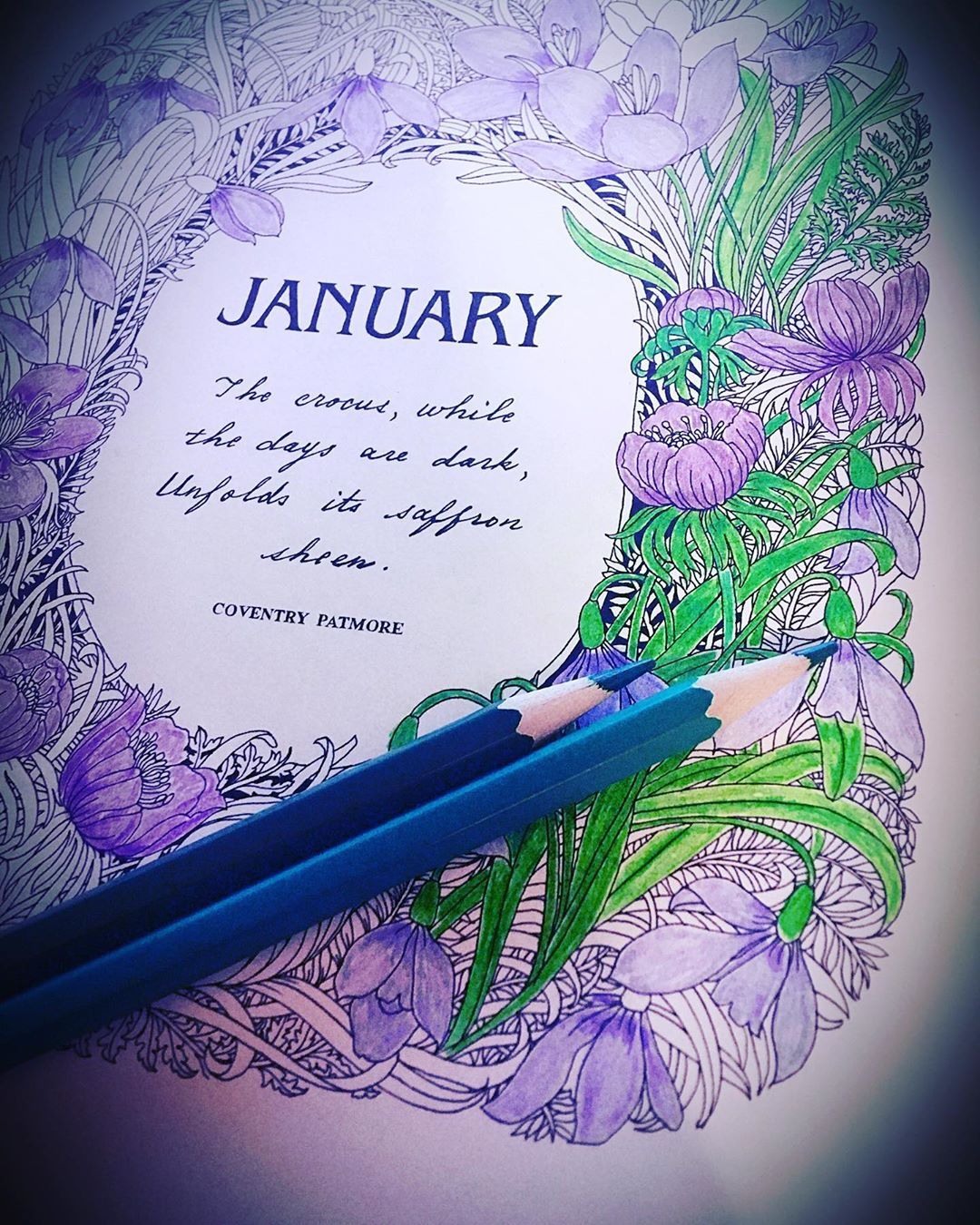 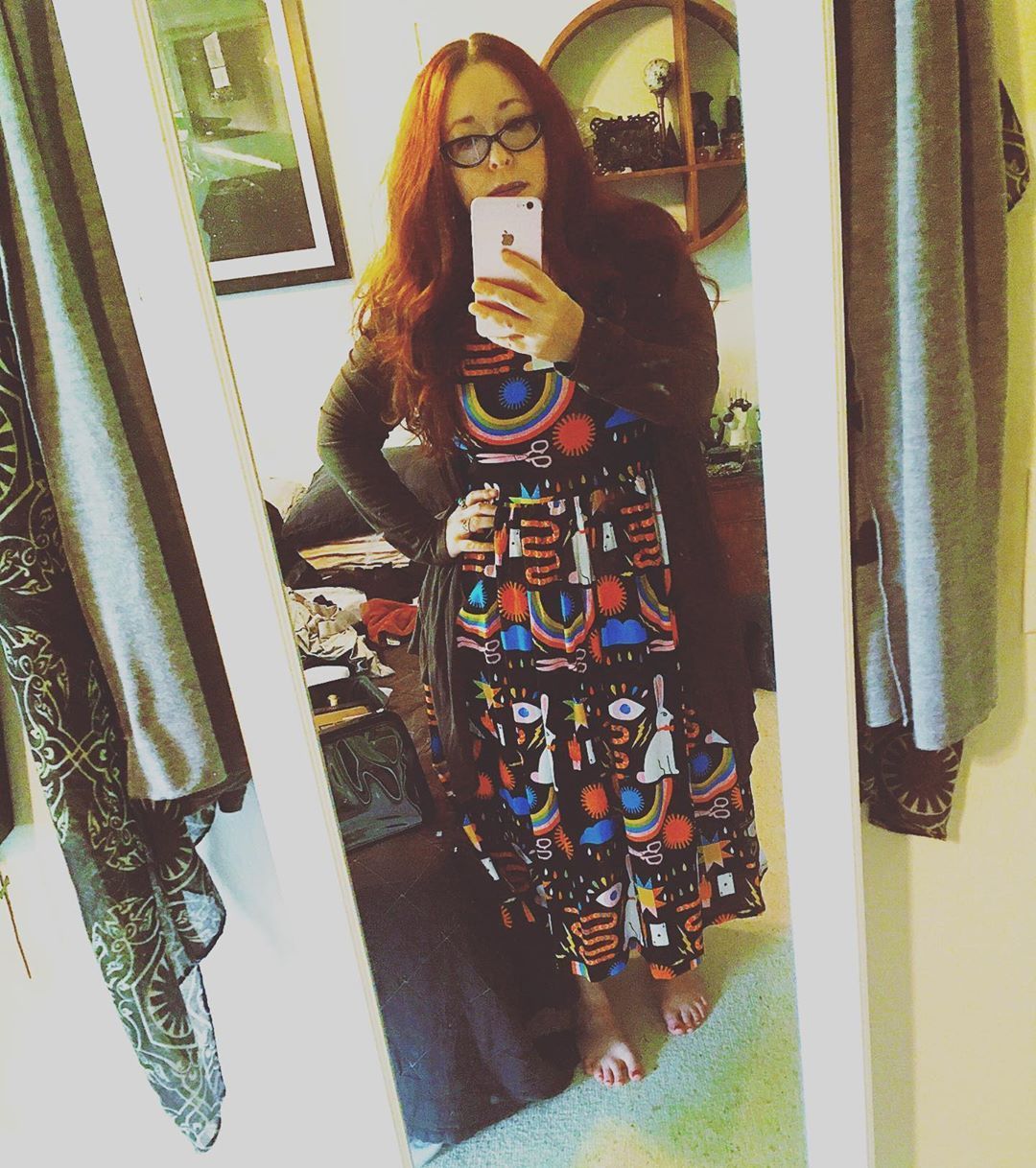 Other things I have done while self-isolating and social distancing over the past few months:

♢ Had a birthday and bought a new book bag and lots of books to fill it up with.
| Resistance | Handbook of American Folklore | The Heart: Frida Kahlo in Paris |
| Southern   Vegan | Ghosts and Grinning Shadows |
♢ Made an insane number of to-do lists and did a lot (probably too many) things
♢ Attended an exceptional online occult writing class, as well as a sigil magic class!
♢ Attempted a calming coloring book session, got very stressed out
♢ Finally fit myself into a dress that never actually fit in the first place
♢ Watched Knives Out. It was fun. Also watched Satanic Panic. Meh? But that orgy scene scored with the Chelsea Wolf song made it worthwhile, I reckon.

Last week I left the house and drove my car for the first time since mid-March. I went to the dentist for a tooth-cleaning. It was both scary and underwhelming. I’m ready for more normal, stupid activities like this, but at the same time, I’m almost certain we’re collectively not ready for this at all. I guess we’ll see. A dental visit and an expression of depressing uncertainty is a bummer of a way to end this missive, and pretty anticlimactic to boot, but that’s all she wrote, I’m afraid.