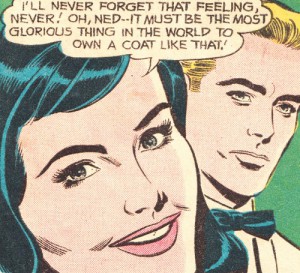 Image: Falling in Love No. 36, August 1960 via comicslams.tumblr.com

The most glorious thing in the world! Goodness.

I have often found that the wanting of things is actually far superior to the obtaining of the things.  There is this breath-catching feeling of anticipation and hope and wonder when one ponders upon the things one desires…but when said thing actually comes into your possession, it’s sort of…depressing, isn’t it? Like “…yeah…okay…this is a nice thing. Ho hum. Next thing, please!” If only we could reconcile that dreamy, ecstasy of wanting something to the boring reality (I imagine it’s sort of like coming down from a high, but I don’t know, I’ve lived a life of deprivation) of having it.  What a world, eh?

Unlike our outerwear-obsessed young woman above, I cannot profess to get all swoony and ecstatic over the thought of a coat, but I’ll admit that fine fragrances and strange baubles cause my heart to quicken a beat.

Right now I am particularly bewitched by just about everything in Holly Bobisuthi’s wondrous shop of mystical talismans.

Additionally, I am a bit besotted by Relique D’Amour Eau de Parfum by Oriza L. Legrand, described thusly: “The smell of an old chapel in a Cistercian abbey. Cold stone walls covered with damp moss. Waxed wood of altar and old pews ornate with carvings. Linseed oil in lamps. Incense and myrrh discernible in the air.”  How can I resist? This has me written all over it. 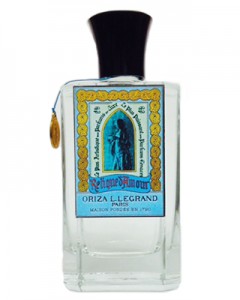 What lovely bits and baubles and fripperies are causing your heart palpitations lately? Do tell!